Martinique Flying Regatta, the Caribbean’s first event solely for foiling boats, concluded yesterday with the two fastest from each of the six classes – GC32, KiteFoil, Windfoil, Moth, Flying Phantom and Onefly – lining up in the final of the Karibea Speed Challenge. This comprised a 0.4 mile long blast reach down a course off Fort Saint Louis, ending just off downtown Fort de France.

Demonstrating again that the KiteFoils are the fastest foiling boats here, the top two Kitefoilers Axel Mazella and Kieran Le Borgne were first and second respectively in the Karibea Speed Challenge, Mazella winning the first prize of a weekend for two at one of the Karibea Hotels on Martinique. The KiteFoils finished ahead of the GC32s, followed by the Moths and Windfoils together, and finally the Oneflys.
Over the last five days, the Kitefoilers sailed 12 races, including a 26 mile coastal ‘Raid’ yesterday. Across all, Mazella maintained his perfect scoreline as Le Borgne finished second, ahead of Vendée Globe skipper Morgan Lagravière.

The Kitefoilers today raced on a new course - three laps of a ‘classic’ triangle with windward, reaching and downwind legs. “It was really nice because the wind was less, 10-12 knots at the beginning, but then it got up to 15-16 knots, so we were able to use bigger kites. It was good to change equipment and compare with other guys,” said Mazella, whose top speed this week was 38 knots.

Alarmingly, Cammas had lost the lead on Thursday. “They raced well," said Cammas of the youth team. "I had a new crew with young people.” NORAUTO reclaimed the lead after winning yesterday’s triple points scoring Raid. He followed this up winning all four races today, showing better speed in this morning’s sub-10 knot winds.

“It is very good, as I expected,” said Cammas of Martinique Flying Regatta. “More GC32s will come next year, because it is good to have more events like this in good places, with good ambiance. The bay here may even be better than Lake Garda because the tactics are more open. Plus I really enjoyed the coastal race around Rocher du Diamant, where it was tricky with the waves. It was interesting, more open than windward-leewards.”

The Moth class turned into a two horse race over the last couple of days, with France's Anthony Rezzoug relieving Swiss rival David Holenweg of the lead yesterday. In today's two windward-leewards, Holenweg closed, but only by one point, not enough to regain the lead.

“I am so pleased!” said a beaming Rezzoug. “I have been sailing Moths for 100s of years and this is my first big victory. Today I won the first race, but the second was more difficult because I capsized right after the bear-away when I was in the middle of the pack."

Swiss sailors took second and fourth place with the latter, former Whitbread Round the World Race crew and professional photographer, Philippe Schiller claiming the last race. “Today was much better than the beginning, when I kept capsizing,” he said. “I loved the reaching starts, because timing and speed have to be precise. I can sail very low downwind - every time I was leading at the bottom mark, but in the first race I capsized because I was too tight. It was very close with Aymeric [Arthaud] who was a point ahead of me.”

Of the event Schiller added: “I am always interested in events where there is wind. Plus to sail in 30°C air and water temperatures - you never feel cold! You couldn’t ask for more.”

The closest finish was in the Onefly, where Julien Villion managed to maintain his lead to win by a point from his usually dominant team mate Guillaume Pirouelle.

“It’s been strange because I have been struggling to be as fast as Guillaume, who has won all of the windward-leewards over the last three days,” admitted Villion. Pirouelle lost the series following his disappointing fifth in the triple points-scoring Raid.

This has been the first major event for the Moth-like one design singlehanders. Villion said they had made good progress. “You can see the improvement in the racing. The first day was a mess and today and yesterday were much better. I’d love to come back next year. This is the perfect place to sail foiling boats with flat water and warm weather.”

In the Windfoil class, there were two stand-out performers this week with both Trevor Caraes (nephew of Jules Verne Trophy winner and Vendee Globe PRO Jacques) and Thomas Lequesne never finishing off the podium. Lequesne closed dramatically when he won the coastal Raid yesterday, albeit just 10m ahead of his rival, but Caraes ended the event today six points clear.

“I am happy to win this first edition of this new race,”said Caraes. “It was a good event with wind every day. Today the wind wasn’t as strong, but it was still good and I conserved my first place overall, which was my objective."

One of France’s powerful Olympic RS:X Women’s team, Hélène Noesmoen finished fifth overall in the Windfoil class. “It was an amazing event with lots of sailing and good weather every day – windy, sunny and warm. On the long distance yesterday, the landscape was amazing and the long waves were nice to surf. I have never sailed in waves like that." 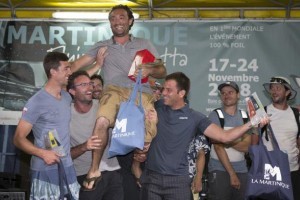