Charleston, South Carolina (May 22, 2018) - After three grueling days of competition and eight Championship races on Charleston Harbor, Jason Michas' MIDNIGHT BLUE with Brian Ledbetter as tactician and Keiran Searle as crew are the new reigning Melges 20 U.S. National Champions - Event No. 6 on the Melges World League Circuit. "It was a great weekend of sailing in Charleston and my crew did an amazing job of getting the boat around the course. We are thrilled to become the new National Champions," said Michas.

He continued: "We are very happy with this result, especially given the company we were sailing against. The level in this fleet, particularly in the U.S., is very high, and it's a blast just to be on the water competing against them. Carolina Yacht Club put on a great event for us, so the club and the Race Committee deserve a big "Thank You", as does Melges for building a world class boat."

In second place overall and winning the tiebreaker, is Jason's father Alexis Michas on MIDNIGHT SUN, with Rob Wilber's CINGHIALE in third.

Friday was the first day of racing with typical May temps and conditions. Three races were completed with Alexis Michas grabbing the first two available bullets of the event, giving him the early lead - a three point advantage over Jason.

The Michas' managed to keep the lead in the family on Day Two. However this time, it was Jason Michas overtaking the lead with a solid string of top three finishes in all four races completed on Saturday. His 3-1-2-3 scoreline helped him leapfrog Alexis for the lead by two points to assume the lead. Wilber stayed in third.

On the third and final day of competition, only one race was held with Wilber getting a much deserved win. Wes Whitmyer's SLINGSHOT finished up the heat in second, followed by John Brown's BLIND SQUIRREL.

A very special thanks to the Carolina Yacht Club who graciously served as host of the 2018 Melges 20 U.S. National Championship, and most especially to every participating race team.

The Melges 20 World League beat carries on this coming weekend (May 25-27) with the second European event of the season happening in Scarlino, a highly competitive and proven venue. 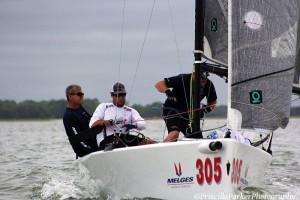 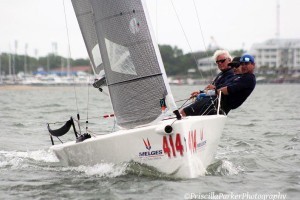