It was eventually a long and beautiful sailing day today for the seventy-two crews that are competing in Riva del Garda for the Melges 24 European Championship. After the four races held in the first two days, the participants have finally been able to benefit from a consistent and steady Ora wind, which allowed the Race Committee, chaired by the American Hank Stuart, to complete three regattas, the maximum allowed by the Notice of Race for each day of racing.

The 2017 World Champions aboard Maidollis (ITA854, 7-1-1 the scores of today), after the excellent debut of the first day in which they scored a magnificent double-bullet, return to be protagonists and consolidate the leadership of the provisional ranking: they hold the first place with 15 points and an advantage of 17 points on the main follower, Caipirinha Junior (ITA633, 1-3-14) by the tandem Ivaldi-Benussi, winners of the first regatta today.

Consistency makes the difference for the American entry Lucky Dog / Gill Race Team (USA749, 5-4-8) of Travis Weisleder that climbs up of one position in the overall ranking and currently occupies the third place with the same score as the aforementioned Caipirinha Jr.

The top five is completed by Mike Goldfarb's War Canoe (USA841, 2-8-12) that concluded the first race of today just a couple of lengths behind Maidollis, after a challenging duel that went on all through the regatta, and by Marco Zammarchi's Taki 4 (ITA778 11-DSQ-3). The Italian boat, already Corinthian World Champion in 2016 and 2017 with Bertola at helm and Fossati calling tactics, keeps the control of the division reserved to non professionals, with a total of 40 points, followed by the Estonian Lenny (EST790, 6-11-4) of the Tõniste twins, whose scoreline is improving day by day, and by Miles Quinton's Gill Race Team (GBR694, 13-10-21), helmed by Geoff Carveth.

With two days of racing and six regattas still to go, the game to determine who will become the next Melges 24 European Champion 2018 is still totally open.

Regattas will resume tomorrow at 13.00 and it will be possible to follow the live streaming powered by Zerogradinord on the Facebook page of the International Melges 24 Class Association. 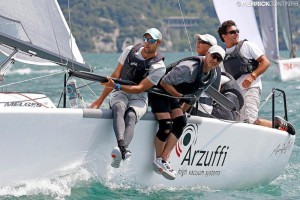 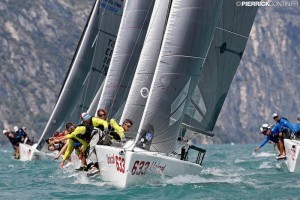 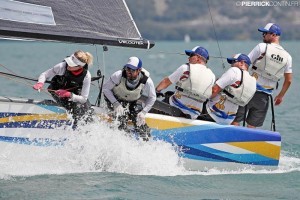 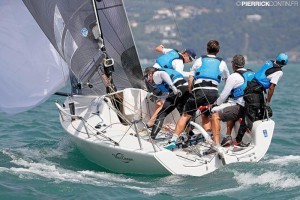 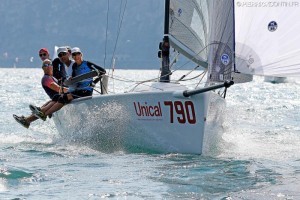 Hempel 2018: Austrians win snakes and ladders in the Bay of Aarhus

Melges 24: Peler and Ora supporting the escape of Strambapapà