First day of the XV Lino Favini Cup does not betray the Melges 24 sailors as the rainy yesterday turned to sunny and lovely autumn day in Luino today. However, today's conditions were not typical to Lake Maggiore and sailors were facing light and tricky winds. Miles Quinton's Gill Race Team with Geoff Carveth helming from Great Britain was the best to read the tricks of the lake collecting two bullets.

The morning in the AVAV - Associazione Velica Alto Verbano saw the Melges 24 sailors gathering for the Skippers Meeting, where the event's host Flavio Favini was happy to welcome fellow sailors at his home club wishing them enjoyable racing and fun after sails ashore. Miles Quinton, the Vice Chairman of the International Melges 24 Class Association greeted the nineteen teams from seven nations at the final regatta of the Melges 24 European Sailing Series being grateful to all who have been travelling through the season in the series. The Principal Race Officer Enrico Vaccaro explained some important details of the Sailing Instructions and after that the fleet headed to the northern part of the lake to have the first warning signal at noon.

First race started in up to twelve knots wind, but was dropping during the race and the chance to start the second race came only half past four. Due to the fact that expected afternoon wind did not fill in enough, reaching up to eight knots and started to fade again during the race, the course was shortened at second upwind mark.
getting two bullets from today's races. The owner Miles Quinton was content with the teamwork and successful races. "It looked like the Italians went to sail against each other in the first race and we were left on our own. We were using this as our advantage and managed to win the first race. In the second race our position in the start wasn't may be the best, but we took another side the majority of the fleet and it worked out in our favour. We had a great first upwind leg being first in the mark with a nice margin and we managed to keep this success until the finish line."

Flavio Favini helming Gianluca Perego's Maidollis ITA854 scored seven and six today and admitted that sailing after a while on Melges 24 their team is a bit rusty and they made some mistakes having twice two-turn penalty. At the same time he is happy to sail again on his favourite boat Melges 24 with his fellow sailors from Blue Moon.
On Saturday the Race Committee decided to take the most out of the morning breeze and the first warning signal has scheduled for 9 am. 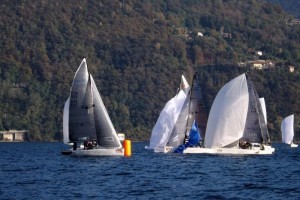 A high-flying edition of the Route du Rhum-Destination Guadeloupe