Rombelli is no stranger to success. He is the defending Grand Prix Champion (2017) and winner of the most recently concluded Copa del Rey. All season long he has played second fiddle to Richard Goransson's INGA (Cameron Appleton, tactician) but today in Lanzarote, he launched a powerful, all-out attack on his opponents.

With his advancement to the top of the general classification, Rombelli is leading the overall 2018 Melges 40 Grand Prix Ranking. But with the three races held on Day One and three different winners awarded, a balanced racing approach for the fleet remains intact.

The first bullet of the day went to Andrea Lacorte at the helm of VITAMINA CETILAR (Gabriele Benussi, tactician). Finally, this aspiring and progressive team demonstrated that they have graduated from being the 'simple rookie,' to being on equal footing and ability with the more experienced teams and names in the Class. Lacorte confirmed his strength with two additional third place finishes, leaving him in second place overall two points behind the event leader.

With the bullet in Race Two finding its way into the clutches of Rombelli, the light and shifty conditions in Race Three enabled a much needed win for Valentin Zavadnikov's DYNAMIQ SYNERGY (Michele Ivaldi, tactician). His much improved finish, pulled him up to end the day on the podium.

Tomorrow the conditions are expected to be in the intensity range of 20 knots, so current outsiders Yukihiro Ishida on SIKON (Manu Weiller, tactician) and Goransson will have the opportunity to redeem themselves. 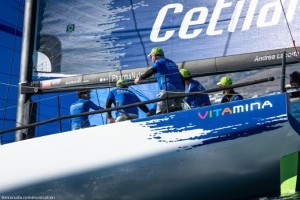 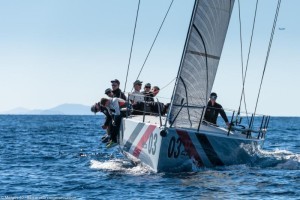 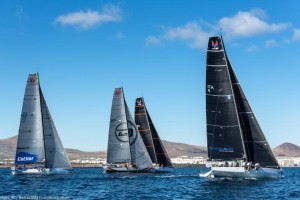