Out on the picturesque waters of Riva del Garda on Lake Garda in Italy, the team will be taking on the combined might of the regular Extreme Sailing Series and the GC32 Racing Tour fleets in what is sure to be a riveting encounter.

Over four days of intense racing a total of 13 elite teams will contest what is the first ever official GC32 World Championship in an ideal venue that could see the high-speed foiling catamarans reach speeds of 35 knots.

For Oman Air there is added spice – the team won last year’s unofficial world championship event held in Muscat, the first time the two fleets had ever raced together, and will be looking to defend their hard-won title.

“We are going to Garda effectively as world champions, so it’s going to be a good one and we are really excited about that,” said Oman Air skipper Phil Robertson.

Having raced at Garda on the GC32 Tour in 2016, Robertson knows it is a venue that can offer something very special for the flying catamarans.

“Lake Garda is probably the best sailing venue in the world, especially for the GC32 – you have flat water and 20-25 knots most days. It is going to be one of the coolest events we do all year. Our team is definitely looking forward to it.”

“We are going there as the champions as we won the title in Muscat last year, so we have a big goal to go for,” said Al Mashari, Oman Air’s highly experienced bowman.

“The GC32 is a great boat and extremely fun to race on. Put more than 12 on a start line as we will have in Garda, and add in some great sailing conditions, and you could have some of the best racing in the world.”

While a standalone event in its own right, the GC32 World Championship is also a point scoring round in the on-going Extreme Sailing Series.

Team Oman Air took a solid podium place at the opening event in Muscat back in March, and after a two-month break are looking to move up the leaderboard. The Swiss Alinghi team currently lead after their victory in the Sultanate, with the ever consistent SAP Extreme Sailing Team in second place just ahead of Oman Air.

The tempo of the Extreme Sailing Series season is also set to increase, with the next event in Barcelona taking place in mid-June, with Cascais, Portugal, making its Extreme Series debut in early July, and Cardiff again hosting the fleet in August. San Diego and Los Cabos, Mexico, will conclude the season in October and November.

Racing on Lake Garda starts on Thursday 24 May, following an official training day on May 23, with racing reaching its peak on Sunday. Around 30 races are likely to be held over the four days of competition. 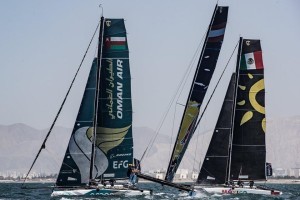 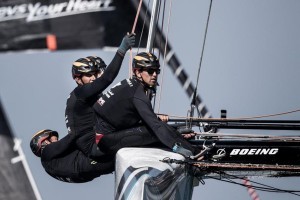 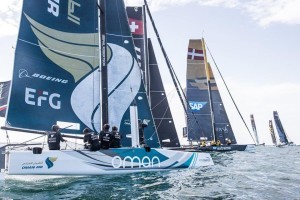