The 2020 World 49er Championship, the last big test for Omani sailors Musab Al Hadi and Waleed Al Kindi’s ahead of next month’s Olympic Qualifiers, has begun at the Royal Geelong Yacht Club in Victoria, Australia.

The World Championship is the final event for Musab and Waleed before they attempt to make history and become the first Omani sailors to qualify for the Olympic Games.

Musab said: “We have spent the last three weeks racing and training in Australia and feel ready for the World Championship.

“Last week’s 2020 Oceania 49er Championship, which was also held in Geelong, was a big learning experience for us. While we were really pleased with our performance overall, we are looking to step it up again over the next week in order to be in the best place possible for next month’s Asian Championship in Abu Dhabi, which will decide which country will get the final Asian spot on offer for the 49er event in Tokyo.”

Racing alongside Musab and Waleed at the World Championships in Geelong are Ahmed Al Hasani and Abdulrahman Al Mashari. The Omani contingent are two of 78 teams, representing 27 countries, that are taking part in the World Championship. Some of the world’s best 49er sailors will be on show, including Rio Olympic Gold medallists Peter Burling and Blair Tuke of New Zealand, Great Britain’s Dylan Fletcher and Stuart Bithell, and Spanish pair Diego Botin and Iago Lopez Marra, who won the 2020 Oceania 49er Championship last week.

However, these former Olympians and World Champions are not the number one competition for Oman, but rather fellow Asian teams Hong Kong and Thailand. Oman must finish as the highest ranked team from Asia, behind Japan, in Abu Dhabi next month in order to qualify for the Olympic Games, so Musab and Waleed are aiming to do that at the World Championship as well.

Waleed said: “The Thai team of Don and Dylan Whitcraft finished just one place ahead of us at the Oceania Championship last week. We got a bit unlucky and missed the final race due to a technical problem with the jib which was disappointing as our performance in the first six races had been really positive.

“We have every confidence that we can reverse that result and finish ahead of Thailand this week at the World Championships. We just need to ensure we communicate well as a team and take every opportunity that presents itself.”

The first opportunity for redemption will be on day two, after the opening day of racing was cancelled. The Race Committee ruled the 25-30 knot wind made the conditions on Geelong’s Corio Bay too choppy for racing.

Fortunately, the forecast for day two is much more favourable, with the south-southwest wind to build to 15-20 knots for the 49er events in the afternoon.

Musab and Waleed’s road to Tokyo is being backed by Oman Sail, which set the goal of making the Olympics in 2020 when it was first established a decade ago.

Oman Sail CEO David Graham said: “So many hours of hard work have gone into getting to this point where the first Omani sailors are in a strong position to make history and qualify for the Olympic Games.

“Musab and Waleed are an inspiration to the hundreds of young sailors who work hard learning how to sail every week across the country. I know I join my Omani colleagues and the rest of the country in wishing Musab and Waleed all the very best this week in Australia. We will also be cheering on Ahmed and Abdulrahman as they represent Oman proudly on the world stage.”

The World Championships will conclude on Saturday 15, with both Omani teams to return home days later to begin preparations for the Asian Championships and Olympic Qualifiers in Abu Dhabi. 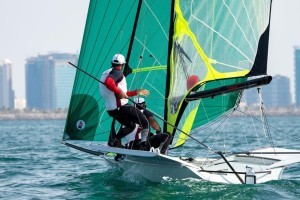 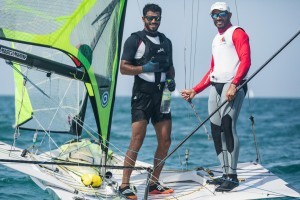 IDEC Sport is in the Inter-Tropical Convergence Zone, Doldrums