The four day event which incorporates 14 different classes will showcase the major regatta debut of the exciting, canting keeled Melges 40 class. Sail Racing Palma Vela 2018 is the second regatta of the season of the Nations Trophy Mediterranean League and is the first event on the four event Wally Class Circuit 2018. While the TP52s and the Wally classes represent some of the latest thinking from leading design offices and both will reflect a winter of hard work, building or optimising or both, there are no fewer than eight one design classes set to race, ClubSwan 50, Swan 45, ClubSwan 42, Melges 40, J/80, Flying 15, Dragon and Hansa 303.

In total there are 136 entries registered at the Real Club Náutico de Palma representing 26 different nations around the world, the most international edition yet. Biggest representation is in the ORC fleet comprising classes 1,2,3 and 4 where 47 boats are entered.

Racing starts Thursday and the fleet on the famous Bay of Palma grows incrementally until Saturday when there will be four course areas in operation staffed by more than 60 personnel including no fewer than 14 mark layers.

Gaspar Morey, the event’s Principal Race Officer revealed, “The forecast is for winds from SE going to W-NW throughout the first day, starting at 5 to 8 knots and increasing to 12-14 knots as the wind goes to the NW. The plan is for coastal races for both Wallys and ORC and windward leewards for the other classes. The rest of the days the weather is not clear, but we can expect a difficult, shifty  week."

There is considerable anticipation in the ten strong TP52 fleet where seven freshly launched boats will make their first official races Thursday. As usual there are some which are more recently launched than others. Three times class champions Quantum Racing’s new boat was only really raced while current champions Azzurra splashed their new boat in Valencia March 14th.

In the intense build up to the first 52 SUPER SERIES regatta in Croatia starting May 21 and because circuit rule limit the number of pre-event training days to three, several of the TP52 teams have been training for nearly two weeks on the Bay of Palma. The Plattner family are running two TP52s, the 2014 The Phoenix for Tina Plattner and a new build Botín design for Hasso Plattner which has America’s Cup winner Ed Baird as tactician, joined by former Quantum Racing pitman Tom Burnham and trimmer Morgan Trubovich.

Phoenix coming into the fleet for the first time encounters a steep learning curve when measured against the benchmarks of Azzurra, Quantum Racing and Platoon, as Phoenix’s Burnham conceded, “We have such a good opportunity with the two Plattner family boats that we have been doing all we can with the 2014 Botín boat and the new Botín boat. It has been fantastic but in terms of the learning curve we are at the bottom of the hill with the steep climb ahead. We are going well and we are gelling well and have a mix of TP52 experience and some new faces which is great.”

TP52 Class manager Rob Weiland believes the differences between the new boats will be tiny. “At this standing of design and engineering with teams of this level of experience and designers on their 15th or 16th generation of TP52 there is not going to be a major breakthrough nor a major design failure. It is about the little jumps, little gains that can be made. And no one is brave enough to go to other designers because it too much of a gamble right now. It is having to put your money on a number rather than just red or black. That is the gamble you take right now. It would be refreshing but it is a gamble for that one owner doing so and for the 52 circuit. In the end the designers that are involved are so good they will still have looked at every option.  You could probably do a very different hull design for flat water but in bumpy stuff or in the real light that would be too big a gamble.”

Brasil’s two times Olympian Eduardo de Souza Ramos returns to the TP52 after a two year hiatus with a new boat Onda. All eyes will be on the one new Vrolijk design here, the new Platoon of Harm Muller Spreer.  And it is not all about new boats, Tony Langley may well expect to have a march on the fleet with his 2015-16 Gladiator which will sail with Ado Stead as tactician following the withdrawl of Ben Ainslie and Giles Scott due to his commitment to the new America’s Cup project. And France’s popular Paprec team have a new boat to them in the shape of the former Rán Racing.

In the five boat Melges 40 class there is a galaxy of talent including Francesco Bruni calling tactics on 2017 circuit winners Stig, Manu Weiller on Sikon which won here in Palma in November. Michele Ivaldi is tactician on Dynamiq Synergy and Branko Brcin is on Vitamin A.

Federico Michetti of Melges Europe commented: ”We are very happy with the number of boats considering we are at just less than one year from the first regatta ever, back in June in Porto Cervo where there were three boats. So this is a growing class. The boats are going great, the owners are very happy and we are so happy to be here in Palma Vela in the big show. That is a dream come true, our first big regatta together. We have a few owners waiting to see how the boats perform, ready to sign and so these are exciting times.” 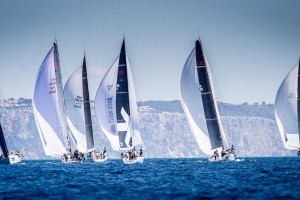 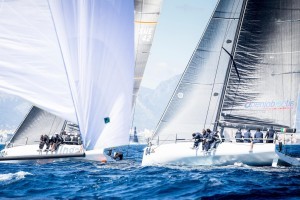 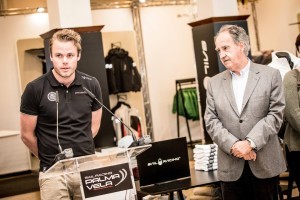 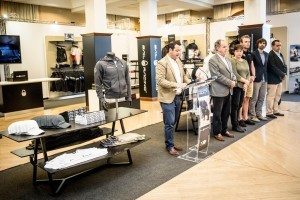 Besenzoni at the 2018 Versilia Yachting Rendez-vous