In 12 months, a fleet of magnificent yachts will start from the island of Lanzarote, in the Canaries, to rally to Christophe Harbour, a premier superyacht and resort community on the southeast peninsula of St Kitts, in the north of the Antilles.

The legendary Panerai Transat Classique race is once again organized by the Atlantic Yacht Club (France) in partnership with the high-end sports watchmaker Officine Panerai, already a strong presence in the classic yacht world through its title sponsorship Panerai Classic Yachts Challenge. The brand’s philosophy is common to the world of the sea and to precision watchmaking: crossing time with elegance, in the respect of the solidarity, expectation and fair-play. Run with the support of the Comet Organization team, this event has become a firm fixture in the offshore racing calendar, and following a century long history of yachting, has established itself as the benchmark for offshore sailing navigation.

A new race, new course. After the wonderful welcome in 2015 from the Canaries and the Marina Lanzarote team of the Calero Marinas group, the race will start again from the island’s capital Arrecife on January, 8th 2019. Competitors will then head in the direction of Christophe Harbour at the southeast point of St. Kitts, in the north of the Lesser Antilles. Located within the sailing ground of St Barths and Antigua, Christophe Harbour is championing the growth of the yachting industry in the dual island nation of St Kitts & Nevis.

Over nearly 3,000 miles (5,000 km), yachts and their crews will compete tactically using their seafaring skills to negotiate the archipelago of the Canary Islands, taking full advantage of the trade winds and then tackle the Antilles passing by the island of Antigua from the north or the south, before crossing the finish line at Christophe Harbour. A dozen sailboats, from 11 to 49 m, are already pre-registered, including a former winner of the event, Stiren, and two exceptional three-masted schooners. Twenty yachts, who have all been part of the beautiful history of sailing and ocean racing for more than 100 years, are expected in the Panerai Transat Classique 2019.

Designed in 2006 by Loïc Blanken and François Séruzier, the Transat Classique 2008 led the yachts from Douarnenez to Agadir, Morocco, then from Agadir to the island of Saint Barth in the West Indies. Stiren, a superb yawl from 1959 designed by Olin Stephens won two of the two stages on corrected time, and became the first overall winner of the event. The Panerai Transat Classique 2012 saw a change of format: with one start from Douarnenez, and another from Saint-Tropez there were two separate rallies to Cascais, Portugal. The entire fleet then joined at the island of Barbados, the easternmost island of the West Indies, and, by winning both stages in both real time and corrected time, White Dolphin, a 1967 Ketch Marconi, designed by the Italian architect Beltrami, won the Grand Slam. Finally, in 2015, on a simpler course (Lanzarote - Fort-de-France), but just as subtle and with tonic weather conditions, the magnificent auric schooner Altair - 40 m long! - designed by the brilliant William Fife III and built in 1931, crossed the line in just over 13 days for 2,800 miles of racing, an exceptional average of nearly 9 knots that will serve as a reference for the 2019 edition of the Panerai Transat Classique. Who will be next on the list of winners? 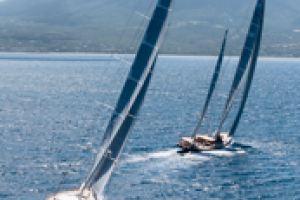 Panerai Transat Classique is off again starting in January 2019

Régates Royales - Trophée Panerai : From all over the world