The forecast spoke of a windy day, but what Barcelona put in place today was a great show with strong winds from 15 to 25 knots, beautiful blue sky and white caps on the waves coming from Barceloneta beach. On day two of the Youth Foiling Gold Grand Final the wind was coming offshore from west/north-west, so when the fleet went out on the water at around 10,30 am the sea was flat and the area just outside Marina Vela Barcelona, host of the event, proved to be a great playground for the nine teams fighting to finish the day within the top six to go ahead in the competition.

DutchSail Janssen de Jong Mixed, Team Black Sailing Argentina, Normandy Inshore Program, Clean Sailors Youth Racing Team, Groupe Atlantic and Okalys Youth Project made it through the Final Fleet Races starting from tomorrow, Saturday November 5th. Nine races maximum will be sailed no later than Sunday around noon, after which the top two teams will challenge each-other in a best-of-three match-race to win the trophy and the voucher for the Youth Foiling Gold Cup 2023.

Groupe Atlantic, one of the three French teams, and one who's been with 69F since its early days, was dramatically and unexpectedly out last night after the first nine races, but they got back to their usual state of form today and finished fifth. 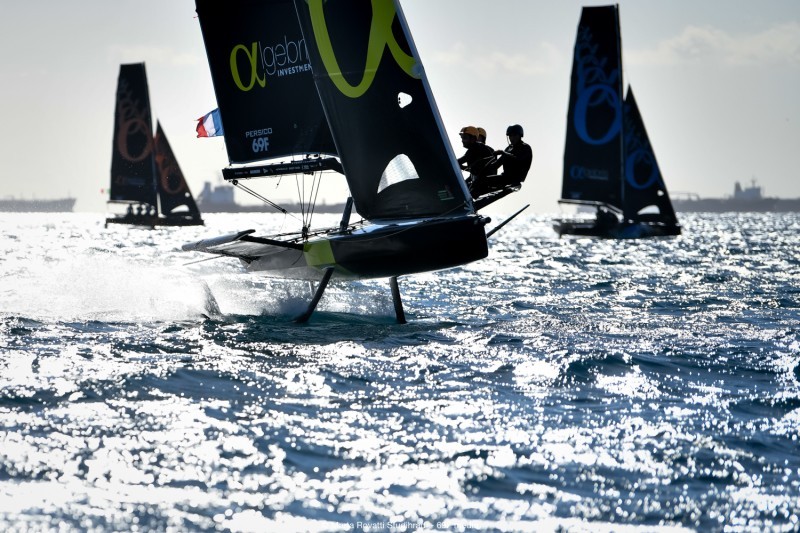 "We had a very bad day yesterday, we had a few penalties that cost us a lot, we knew though we had the means to come back today, even if there were a lot of points to catch up", commented Louis Chambet, mainsail trimmer for Groupe Atlantic. "Today we were ready for the fight and with the wind blowing strong we felt confident with the maneuvers and the speed of the boat. We managed to have six clean races finishing withing the top three and that was enough to get us back in the final and we were just happy. We have two new members in our team, but they are perfectly merged with the teams, so I think we just had a bad day yesterday, and hopefully is the only one for this event".

A different feeling onboard another French team, Team France, who was kicked out of the finals while they were on 'by' on the island boat.
"It was a hard day for us, two good races to start our journey, but we made some mistakes after that, a few capsizes made it hard to stay in..", said Charles Dorange, flight controller on Team France. "We are a bit sad, but it's interesting for us, we can debrief with the crew and learn from this to come back stronger next year".

A bit cold and very tired, the sailors found a warm and tasty welcome ashore organized by Velissima, the partner restaurant of the Grand Final. A little social time and well-deserved rest tonight while the wetsuits dry up for more action tomorrow, on the waters where the 37th America's Cup will be sailed in just two years.

Project Landspeed: pushing on however we can