Season 2 of the Pro Sailing Tour: discover the venues

From Bonifacio in Corsica to Cowes in the Isle of Wight, the Pro Sailing Tour (11 May-10 July) will take in some of the most spectacular venues that the Mediterranean, the Atlantic and the English Channel have to offer. The second season of the Pro Sailing Tour, one of ocean racing’s most exciting new competitions, gets underway in May with a multinational fleet of eight foiling trimarans and 50 of the best offshore sailors!

Renowned for its intensity, its boat-on-boat battles and a very high level of racing, the Pro Sailing Tour brings together talented skippers racing the Ocean Fifty foiling trimarans that are as long as they are wide (15.24m x 15m respectively), as agile as they are spectacular and that can reach speeds of up to 42 knots (77km/h), on both inshore and offshore racecourses.

The curtain lifts on season 2 of the Pro Sailing Tour next week with Episode 1 getting underway in Bonifacio, Corsica from 11-15 May. Eight foiling trimarans will descend on one of the most beautiful locations in the Mediterranean, with its limestone cliffs, turquoise water, and Genoese-influenced port, it is one of the loveliest places on the ‘Île de Beauté’. Racing starts on Thursday with two days of inshore racing followed by a race around Corsica finishing Sunday. "This ecologically responsible event, which brings together top-level sailors, could only receive the support of the people of Bonifacio! I am delighted with this partnership which will benefit all visitors from all horizons. This can only contribute to building a sustainable nautical industry for future generations,” said mayor of the Bonifacio , Jean-Charles Orsucci.

Next the show moves to the playground of the Ocean Fifty trimarans in Brittany, where Episode 2 will unfold off the harbour of Brest (22-26 June) where it all began in 2021. "The maritime metropolis of Brest can be proud of the exploits of some very talented sailors and the Pro Sailing Tour is no exception. It is therefore with pleasure and pride that the people of Brest will welcome the Ocean Fifty, which will perform spectacularly in front of their eyes in the nautical stadium that is Brest harbour,” said the mayor of the city and president of the Pays de Brest, François Cuillandre.

And the battle will continue as the condensed 2-month series reaches its halfway mark, on the Bay of Saint-Brieuc, where Episode 3 will play out (30 June-3 July). “Hosting the Pro Sailing Tour will allow us to promote the region and position it for major nautical events,” said Ronan Kerdraon, President of Saint-Brieuc Armor Agglomération.

Next the fleet heads across the English Channel to Cowes (5-6 July), a world capital of ocean racing, where the Pro Sailing Tour will receive a warm welcome from the prestigious Royal London Yacht Club. “For nearly 200 years, Cowes has been the centre of British yachting and is ready to receive this prestigious event. The Royal London Yacht Club, established in 1838, is delighted to host the Ocean Fifty sailors in The Solent,” said Martin Thomas, Commodore of the Royal London Yacht Club. The Club will provide facilities for the organisers, the competitors and is arranging social events and an event dinner, plus Race Officers from the Royal London will start the boats for the ‘Final Rush’ from Cowes to Roscoff on 6 July. Gary Hall, Cowes Harbour Commission chief executive, added his voice: "We are delighted to welcome the Pro Sailing Tour to Cowes and to share the Ocean Fifty trimarans with everyone here. We are particularly pleased to bring the Pro Sailing Tour to the forefront and strengthen the links between young students, the curious, the aspiring sailors and the skippers. They will have the opportunity to see these exceptional boats up close and to meet the crews on shore.” 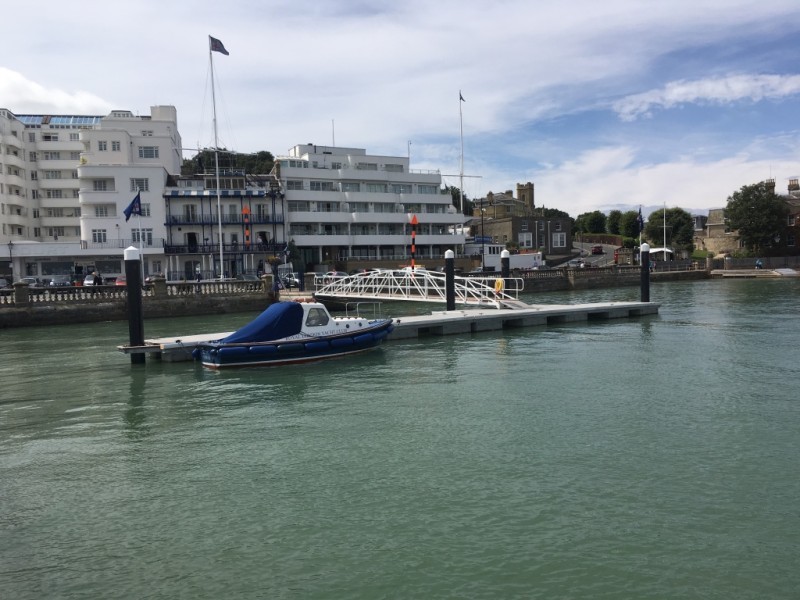 On 6 July, the Final Rush will take the fleet from Cowes to Roscoff where they are due to arrive on 9 July before a final coastal race on 10 July to establish the winner of season 2.

A jewel nestled on the coast of Finistère in Brittany, Roscoff, and the Bay of Morlaix are exceptionally beautiful and well known for their maritime and natural coastal heritage. Labelled as a "Petite Cité de Caractère", the former corsair town has a rich cultural and architectural heritage: shipowners' houses, listed church, old quays, lighthouse... It will offer sporting fans a close-up of one of ocean racing’s most exciting new competitions!

"After an incredible first season, we are going to have the opportunity to sail in new places such as Corsica or the Isle of Wight. In addition, we'll be returning to places that are emblematic for the Ocean Fifty, such as Brest and the Bay of Saint-Brieuc. We're all looking forward to it!” said Thibaut Vauchel-Camus, skipper of Solidaires En Peloton-ARSEP.

Alongside Petzl, Bollé and Helly Hansen join the adventure

Alongside the cities that will be hosting the crews, Pro Sailing is proud to have the support of several partners. Petzl recently announced its support and is joined by two well-known brands in ocean racing circles: Bollé and Helly Hansen.

Bollé, a French brand created in 1988, will provide skippers with the Vulture model sunglasses, adapted to the demands of offshore sailing. "We have a lot in common with the circuit and we are convinced that this is the beginning of a great common story," said Sandie Torondel, Global Brands Visibility Manager.

The Norwegian brand Helly Hansen, founded in 1877, is a leader in the design of technical sailing and performance ski clothing, as well as high-end workwear. The company, synonymous with innovation, developed among other things, the first waterproof soft fabrics 140 years ago, and its clothing and footwear are sold in more than 40 countries and are trusted by professionals and outdoor enthusiasts around the world. Helly Hansen is held in high regard and with shared values of high standards, sportsmanship and surpassing oneself, makes an association with Pro Sailing Tour a natural fit.

Arcadia Yachts makes its debut at the Venice boat show

Countdown to season 2 of the Pro Sailing Tour