Malta has often been described as the ‘crossroads of the Mediterranean’. The fleet gathering for the 2018 Rolex Middle Sea Race may well help change that description to the ‘crossroads of the world’, certainly the sailing world. Some 55 yachts, representing 25 countries from as far afield as Australia, Canada, Chile, The Philippines, and the United States, have entered to date. There is nothing unusual in this spread of nations. The race, which this year starts on 20th October, has always attracted a polyglot fleet and a walk along the dock is cultural affair.

Nicholas Ibañez Scott, skipper of the Chilean entry Anita, a J/122, is returning to the race for a second time having made his debut in the tough conditions of 2017. Anita was one of only 35 yachts out of 104 starters to complete the 606-nautical mile course last year. Testament to both the tough streak running through a crew used to the southern straits of Patagonia and the challenge presented by this classic offshore race. One of the elements that struck Scott the most about their first encounter with the race was a sense of belonging. “We feel very much at home here,” he said before the start, putting this down to the warmth and professionalism of the Royal Malta Yacht Club along with the attitude and quality of the competing sailors. Throw in the spectacular scenery of the racecourse and no wonder he is coming back in October.

The Botin 65 Caro, skippered by German yachtsman Maximillian Klink, has undertaken the race four times since her launch in 2013. The best result under IRC, the rating system used to determine the overall winner of the race, was in 2016 when she finished 5th from a fleet of 95 contenders. Klink, who also took on the race in his previous yacht, is typical of those who are bitten by the event’s allure to return over and again, regardless of results, to enjoy the hospitality ashore, the remarkable landscapes and the varied sailing conditions.

Vladimir Liubomirov is a familiar name on the international yacht racing circuit. His Bronenosec team has participated in in many of the top sailing competitions over the recent years, putting in some impressive performances on the TP52, RC44 and Swan 60 circuits. This year the Russian team, representing the St Petersburg Yacht Club, will take on the Rolex Middle Sea Race in their latest yacht, a ClubSwan 50. A proven one design racer, this will be a first, serious offshore test for the Juan K design.

Canadian honour lies in the hands of Morgen Watson and the crew of Hermes, a Pogo 12.50. At the time of this release, Hermes is getting some serious miles under her belt, taking part in the Atlantic Anniversary Regatta transatlantic race from Bermuda to Hamburg, Germany. The crew has already proved its mettle, surviving and finishing a particularly brutal edition of the RORC Caribbean 600 earlier this year.

Historical Note
Another race celebrating its 50th anniversary is the Golden Globe solo round the world race. The RMYC has invited Sir Robin Knox Johnston, the winner of that race and first solo, non-stop circumnavigator, to be its guest of honour for the start. It is hoped he will be joined by Alan Green, one of the Rolex Middle Sea Race founders and former Race Director of the Royal Ocean Racing Club. The club is planning a Q & A session ahead of the start that would see these two joined by Admiral Giovanni Iannucci, a stalwart of the jury for many years, and John Ripard Sr, President of the RMYC and skipper of Josian, the first yacht to win the race back in 1968. 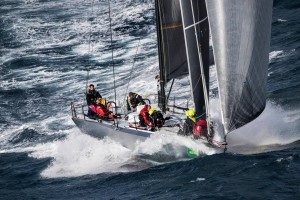 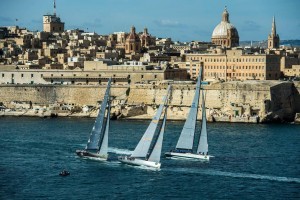 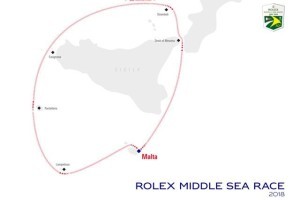