The 50th anniversary Rolex Middle Sea Race is underway. A record fleet of 130 yachts was waved on its way by large crowds filling the bastions of Valletta and the Three Cities, and other vantage points. Grand Harbour, Valletta, is a magnificent location in its own right. Each year, the lily is gilded by an intrepid fleet of Corinthian and professional sailors, adventurers and voyagers, all determined to take on the challenge presented by this classic 606nm offshore race.

By 17:00 CEST, the majority of the fleet was hard on the wind heading for Capo Passero on the southern tip of Sicily. The heavier displacement boats are enjoying the upwind conditions. Strategic decisions are beginning to play out, with most staying north of the rhumb line. Approaching the land, the breeze looks to be shifting and fading. Staying in the best pressure to round the cape will be the common goal.

George David's Maxi American Rambler 88 is leading the charge in the monohull fleet, with their closest rivals on the water two miles behind: Dieter Schön German Maxi72 Momo, and the 115ft Baltic Nikata. In the Multihull fleet, Giovanni Soldini's Maserati and the Ned Collier Wakefield skippered PowerPlay were in close combat just off the coast of Sicily, locked in a duel, having blasted close to 70 miles upwind in just four hours. Just before going to press, Maserati reported suffering damage to the starboard rudder. She continues to race and the extent of the problem is being examined.

The start line between the Saluting Battery on the Valletta side and Fort St. Angelo, on Birgu, is an intimidating setting. Atmosphere and tension within the crews is heightened by the crash of cannon fire for each of the seven starts. A 15 knot north-easterly developed a building sea-state outside the breakwater, but importantly meant each start was able to get away in breeze.

First away was the four boat Multihull class. Two pairs of contrasting boats making up this compact, but nevertheless impressive-looking division. PowerPlay got the better of Maserati in the battle of the MOD70 racing trimarans, while Allegra was quicker off the mark than R-Six. Tacking a multihull is tricky at the best of times, within the gusty confines of the starting arena it becomes an art-form. PowerPlay’s on-the-money start allowed her to choose her lanes and she led the class out of the harbour.

For the considerably more numerous monohull contingent, the starts come in size order with the smallest and slowest going first. Class Six was marked by a number of double-handed crews, including the Austrian entry 2Hard, British yacht Jangada and the 2017 Overall Winner, Bogatyr. Having won the race fully-crewed last year, the owner, Igor Rytov, has chosen to take on the course short-handed. Few would bet against him pulling off another remarkable achievement given his early commitment. The Russian’s competitive edge got the better of him at the start, with Bogatyr over the line early requiring a frustrating turnabout to restart. Rytov, though, then lit the afterburners and by the turning mark off Dragonara was back amongst his classmates. Seawolf looked to have the best start, but by the harbour entrance Timofey Zhbankov’s Rossko was out in front.

The last start was reserved for most powerful yachts in the fleet. The eight-boat class was one of contrasts. The mammoth 115-foot Nikata, the largest yacht ever to start the Rolex Middle Sea Race, towering over the likes of the 60-footers Wild Joe and Oz, at almost half the length. Rambler 88, the three-time Line Honours winner, with her all-star crew led by owner George David, with Brad Butterworth and Silvio Arrivabene providing tactical advice and navigational input, was handed a lesson off the line by the Maxi 72 Momo. Just past the harbour entrance turning mark, normal order resumed with Rambler broadening her sailing angle and using her performance-enhancing assets to rapidly reel in and overtake the German pretenders.

The starts sandwiched between these two were just as dramatic, just as exciting. The breath-taking amphitheatre offered by Grand Harbour provides a start environment the equal of any other 600nm offshore classic. Sir Robin Knox-Johnston, one of the race’s guests of honour, may have seen it all over the years, but even he was enthralled, admiring the scene from the Saluting Battery: “It’s a truly impressive spectacle; what a place to start a race.”

Ahead of race start, crews made their last-minute preparations. Loading provisions, checking personal kit, saying their goodbyes to loved ones. The anticipation for the adventure ahead was tangible. Italian sailor, Andrea Iacopini, racing aboard Amapoula, is taking part for the fourth time. Uncertain of the weather, he was clear in his appreciation of the course: “It’s the most incredible race I’ve done. Volcanoes, islands, currents, tides, wonderful colours. It is definitely the most beautiful race in the world.”

Even professional crew, like Laurent Pages sailing on Eric de Turckheim’s Teasing Machine in his third Rolex Middle Sea Race, are able to look beyond the immediate tactical battles to appreciate the race environment: “The attraction of this race is a combination of things: technically it’s very intense, from the start in Grand Harbour to the strength of the fleet, which always makes it a real challenge. And, the course that goes around Sicily, so Etna, Messina Strait, Stromboli and all the other spots is simply quite amazing.

Nicolas Ibanez Scott, owner of Chilean yacht Anita, took part for the first-time last year. Back again for another go despite the beating given by the weather conditions in 2017, Ibanez was looking forward to the race ahead: “Last year it was rough, it was tough, the weather was hard. We are enthused to be going again. There are great teams out there and we hope to enjoy a fine race, with better winds. In terms of strategy, we have a much clearer view of what we should do and should try to avoid. We feel better prepared, but that doesn’t mean it will be any easier. It’s fascinating and a privilege to be a part of this great race.”

Royal Malta Yacht Club Principal Race Officer, Peter Dimech, was delighted to have got the full fleet away on time and without issue: "It went like clockwork with all starts on time. Although the fleet had at least one tack in harbour, it all went smoothly and they cleared the harbour without any incident."

IRC Four: Swan 651 Lunz Am Meer, skippered by Riccardo Genghini, has been in her element upwind. Philippe Franz's NM43 Albator is holding on to their bigger rival, just ahead of Frank Werst's Swan 53 Silveren Swaen. The Podesta family racing the Maltese First 45, Elusive 2, is among the front-runners, and holding off their local rivals, Josef Schultheis & Timmy Camilleri on the Xp-44, XP-ACT.

For further information about the race please visit: www.rolexmiddlesearace.com
or contact the Royal Malta Yacht Club on info@rmyc.org

Valletta is European Capital of Culture in 2018 and the Rolex Middle Sea Race will feature strongly in the calendar of events supporting this initiative. For more details on Valletta2018, please visit https://valletta2018.org 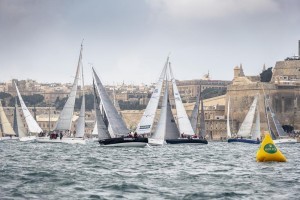 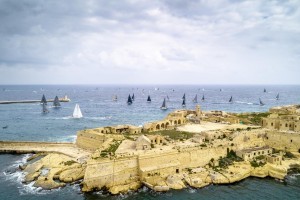 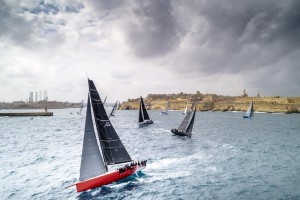