The third day of the 2018 Rolex Middle Sea Race has seen the course open up. All yachts, still racing, have passed Stromboli and the majority are heading into a steady westerly on the leg from the volcanic island to the north-west corner of Sicily. Ahead of them, the wind is predicted to build in strength substantially and drive south through the Strait of Sicily around sunset. This north-westerly wind will power the yachts home, bringing with it gusts and increasingly bigger waves that will pose demanding questions of the crews’ seamanship skills, particularly after dark.

The contest for Line Honours in both multihull and monohull fleets had looked settled earlier today as, respectively, the Italian trimaran Maserati and the American maxi Rambler emerged from the second night at sea with significant leads over their closest divisional rivals: the MOD 70 PowerPlay and the Maxi 72 Momo. By 1700 CEST, this afternoon, all four were well past Pantelleria and the gaps had shrunk sufficiently to suggest the game may not yet be over. The leaders will remain confident in their ability to control those behind, but will be wary of costly errors in boat-handling or decision-making and equipment failure as they gybe downwind towards the southern-most corner of the course at Lampedusa.

The front-runners are expected to speed up as they round Lampedusa and the first boats should be home in the early hours of Tuesday morning.

RIDERS ON THE STORM

Reports from all parts of the fleet suggest last night was far from easy. A violent thunderstorm hit Malta at 0300 in the morning, and it seems the competitors suffered the same. Even those at the front of the race were not spared, as Giovanni Soldini, the skipper of Maserati, confirmed. “A very violent squall line with strong gusts of wind, thunder and lightning passed over our heads,” explained Soldini. “We were able to shorten the sails very quickly without any damage, we stopped for just five minutes. One of the concerns was obviously damaged rudder: with strong winds and sudden gusts coming from left, we needed to be very careful…to keep the central hull in the water or we would be left without any rudder in use.”

Further back, Andy Middleton and the crew of the Grand Soleil 43 PYR–Jua Kali, also experienced the Mediterranean’s full wrath in the dark: “We got sucked into a rather horrific thunderstorm. We couldn’t see a thing … we were doing doughnuts … torrential rain. It was absolute carnage.” It did not last and Middleton was happy to report the rounding of Stromboli this morning was in more controlled circumstances and under spinnaker. His final remark was telling: “We know we’ve got a bit more breeze to come … we just hope it won’t be as bad as we’re expecting.” PYR-Jua Kali would soon be on the breeze and at 1700 CEST were due north of Filicudi beating into the steady westerly. Gerard Ludovic on the French JPK10.80, Solenn, also reported: “A hectic second part of the night with impressive thunderstorms, followed by an enjoyable kite session to Stromboli. All good onboard, but wet!”

The wind speed is expected to rise over the next few hours, with the potential for a full-blown gale to hit the majority of the fleet later tonight. This change in conditions should be to the gain of the high-performance yachts in the IRC Classes. Those yachts that have the opportunity to win overall might just be decided in the next 12 hours of furious action during the hours of darkness.

Several of the IRC Class 2 yachts will be licking their lips in anticipation. Gérard Logel's French TP52 Arobas is one of those to have eased sheets and pulled the trigger. The first of the IRC Class 2 yachts to blast past Favignana, she is waiting for the 40 knot north-westerly to catch her up. Pietro Moschini's Italian entry, Endlessgame, the canting keeled Cookson 50, is another that will relish the predicted big breeze. Stefan Jentzsch's Carkeek 47 Black Pearl, the smallest of the group, is estimated to be leading IRC Class 2 after time correction. Her well-drilled crew will know that they have it all on to stay in pole position. Swan 82 2nd Chance, from Switzerland, is the largest of the group and may harbour hope her water-line length will prove an advantage. Vadim Yakimenko’s Russian TP52, Freccia Rossa, with Olympic Gold medallist Martin Kirketerp on board, is very much in the mix, but self-professed light wind specialist. The big breeze may lead to some trepidation. Eric de Turckheim's NM54 Teasing Machine is a proven bluewater race winner and boasts a formidable crew more than capable of making the most of mother nature’s offering. Navigator Juan Carlos Oliva reported in from the Italian Mylius 60, Fra Diavolo, as the team approached Favignana. “Right now, we are on the wind in 20 knots and looking forward to cracking sheets at Favignana,” commented Oliva, an expert meteorologist. “We expect the wind strength to increase tonight, and even more tomorrow morning, where we could possibly see 50 knots. To prepare for this, we are keeping a proper watch system, so that everyone is rested before the rough weather ahead.”

In the contest for overall victory, the race tracker has been showing an interesting battle at the front between two contrasting yachts. The German Maxi 72, Momo, launched in 2014, currently holds the lead under IRC time correction. Making her race debut in 2015, when she finished third overall, Dieter Schön and his crew have since won the Rolex Maxi 72 World Championship twice and the Rolex Giraglia offshore race among other successes. The Maxi 72 is a state of the art carbon composite racer: 21.95m in length with a beam of 5.75m, a draft of 5.2m and displacement of around 16.5 tonnes. Lunz Am Meer, a Swan 651, has also been on or near the podium since the start. Designed in 1982 by Germán Frers, the model replaced the iconic S&S designed Swan 65. Back in her day, the Swan 651 was considered a cutting-edge performance-design, blending grand prix maxi attributes with round the world race pedigree and a full teak interior. Displacement is about 36 tonnes, of which ballast alone is 14.5 tonnes. The likelihood is that the upwind demands of the first half of the race have suited the heavy displacement of the Austrian yacht. As boats bear away for the fast, downwind ride to Lampedusa, Lunz Am Meer’s sea-kindly manner will keep her crew comfortable, but her modern, wide beamed counterparts are likely to surf off into the distance.

Among the Maltese entries, the local rivalries continue to intrigue. For the moment, Ramon Sant Hill & Jonas Diamantino’s Comanche Raider III is leading the Maltese fleet. Closest to the northern coast of Sicily, positioned just north of Palermo, Comanche Raider has around 330 miles to the finish. Further offshore, some 12nm behind, Josef Schultheis & Timmy Camilleri's XP-ACT is having an epic battle with the Podesta family racing the Beneteau First 45, Elusive 2 directly in her wake.

Meanwhile, Jonathan Gambin's Ton Ton Maltacharters, with 350 miles to run, is ahead of the Double-Handed teams of Sean Arrigo and Brian Flahive, on Otra Vez, and Jamie Sammut and John Cachia, on Unica. All three are enjoying a close battle on the water, 15-20 miles or so behind the leading Maltese boats. Unfortunately, Sean Borg's Xpresso has sustained damage to their main track in a vicious thunderstorm last night. All crew are well, but they look likely to return to Malta. 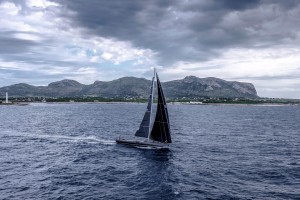