Racing gets underway tomorrow on the Solent for the first two inshore races of the Royal Ocean Racing Club's combined IRC European Championship and the Commodores' Cup.

Over the last 48 hours the RORC's scrutineers have been checking all of the yachts to ensure they comply with the equipment requirements for the event, including World Sailing's Offshore Special Regulations Category 3, although due to the offshore element of the event boats must have Category 2 liferafts.

Meanwhile Jason Smithwick's team from the Lymington-based RORC Rating Office have also been busy carrying out measurement checks. All yachts must have IRC Endorsed certificates to compete at this European championship for the rating rule, created and managed jointly by the Royal Ocean Racing Club and the Union Course au Large in France. To be eligible to enter the IRC Europeans, boats must have an IRC rating of 0.995-1.270, a displacement-length ratio of <210 and a maximum draft of 3m.

By modern standards the IRC Europeans/Commodores' Cup is a lengthy event providing competitors with a full seven days of racing. This provides more than adequate opportunity to challenge crews in not just a variety of conditions, but also on different race courses. The event schedule follows the Commodores' Cup format of recent years comprising a 24-36 hour 'long' offshore plus a race around the Isle of Wight, with inshore racing in between.

However, the race committee led by Stuart Childerley, has the right to change the schedule if it is felt it will improve the racing given the forecast weather. Chris Stone, Royal Ocean Racing Club's Racing Manager has also been monitoring the coming week's weather closely. "In the last three or four days it has changed several times, which is a concern. We are going to have three or four lighter days but only one's looking marginal. If conditions get too soft, that may make it hard racing against the tide, but in terms of the schedule at this point of time, we'll play it by ear. We'll change it if conditions don't come to fruition."

Racing gets underway tomorrow with a first warning signal at 1115 BST. 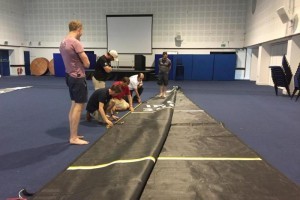 VOR: every point counts as teams prepare for Sunday start in Cardiff

Moana leaps forward on day 2 of the IRC Europeans