New Zealand battled back from a four point pre-event penalty to claim dominating victory over Denmark and Australia on the final day of racing in Singapore.

The Kiwis left Nicolai Sehested’s Denmark and Tom Slingsby’s Australia trailing in their wake and wowed crowds with a 100% fly time, an average speed of 53 km/h and top speed of 77.1 km/h.

It marks the third event win of the season for the team, which started the event with -4 points after a collision with the United States in practice.

Speaking after the win, driver Peter Burling said: “To be able to put it together today is an amazing feeling and everyone did an amazing job.

"We’ve been sailing consistently all week - it’s a shame to have those penalty points for the season but it’s good to come out and show what we’ve got and how strong this team actually is.”

Burling said he was ‘most nervous’ in the pre-start as building pressure of 33 km/h saw crews fight to de-power the large 29m wing. Australia had the quickest start of 63.4 km/h, while Denmark was closest at the gun - just six meters from the line - but it was the Kiwis who had the best angle to mark one.

A bad maneuver by Aussies on the third leg of the race sent them to the back of the pack before Denmark crashed into the water at Gate 3 - allowing the Kiwis to extend their lead to over 100m. 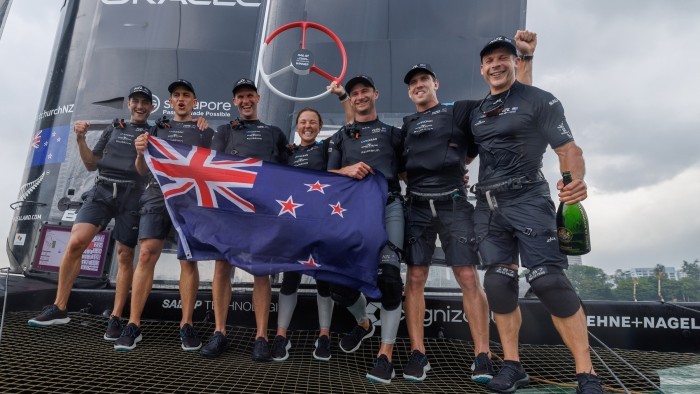 Denmark’s second place finish will be a welcome result for Sehested’s crew, which last finished on the podium at the ROCKWOOL Denmark Sail Grand Prix last August.

Fleet racing
Elsewhere, the second day of racing saw a vastly improved showing by Sebastien Schneiter’s young Swiss crew, which picked up its first win in the day's opening race and followed it with a second place finish in the final fleet race. The crew, which benefited from excellent tactical decisions from strategist Nathan Outteridge, missed out on its first place in a Final by just two points.

The result now means that all nine teams in the league have secured race wins - proving the progression of the fleet.

The weekend saw an uncharacteristically poor performance from Quentin Delapierre’s France, which picked up a 7-9-4-6 fleet racing record to finish eighth overall and lose its third place position in the overall Championship leaderboard.

The United States also failed to rise to the ‘now or never’ pressure of the event, finishing seventh overall and almost certainly ruling itself out of San Francisco’s Grand Final in May.

The refreshed Championship leaderboard sees Australia retain its first place position with 68 points, and New Zealand close the gap with 59 points in second. Great Britain knocks France from the top three to move into third with 54 points, while France drops down to fourth.

The nine-strong fleet will next meet at the Australia Sail Grand Prix on February 18-19.

Maserati celebrate with Snowflake and Zoulou in Grenada

Alinghi, dancing between flight and splash down