Two young and talented at the Star Sailors League

They’re young and talented and the Star Sailors League Finals 2018 will be their first time racing a Star boat and racing one against the other. Ondrej Teply (CZE) and Guido Gallinaro (ITA) both freshly crowned Junior World Champions 2018 in the Finn and Laser Radial class respectively.

Both started sailing very young and both went racing in Optimist national regattas as soon as they turned eight. Sailing, for both of them, was a passion written in their DNA. Before they were able to be at the helm themselves, they would go and watch regattas from the RIBs.

“I used to follow my brother in the Optmist before I was old enough to sail myself," recounted Guido Gallinaro, born on Lake Garda 17 years ago. Guido in 2018 won every possible Junior title, Italian, European and the Worlds in the Laser Radial “This is definitely the biggest achievement of my sailing career so far. I came so close to winning it in the past four years, both in Radial and 4.7, that I really longed for it, but I probably needed to be more mentally trained, more experienced, to overcome the adversities that such a competitive class can give. The top ten guys are always so close that a bad day can easily throw you from the top spot to 11th”.

For Ondrej this Junior World title in the Finn is not the first one on his sailing CV, he won his first Finn Silver Cup (name of the U23 title in the Finn class) back in 2015 in Valencia when he was just 20 years old and became the first Finn sailor to win the Junior Worlds twice. “It would be great if I could replicate this achievement in the senior fleet one day," he says optimistically "The Finn is the best boat, so physical and demanding, you have to give your all, especially downwind with the free pumping”.

Guido Gallinaro will turn 18 when he is competing in Nassau this December - the youngest skipper to ever have sailed the SSL Finals. He will be with German crew Kilian Weise, a 23-year-old ‘up and coming’ Star sailor who finished third at the 2018 Eastern Championship in Trieste in May. The invitation took him by surprise after he watched the full SSL Finals 2017 live over the internet. He’s looking forward to meeting all of the incredible Laser sailors that will be there, and Paul Cayard - a true legend for all the Italian sailors after Il Moro di Venezia - but also to being on the starting line among legends like Scheidt - whom he met in Riva del Garda for a training session. “I get scared if I think about it, but I will just do what I am used to doing and I will try to avoid making any silly mistakes and watch the others and get as much information as possible from them and see how they approach a regatta.”

Ondrej Teply will try to have a different approach, and think as all of the rock stars on the starting line as just ‘people’ he says: “I was really hoping to receive the invitation as the former U23 Finn World Champion received it (Oskari Muhonen FIN), and I am thrilled about it, about racing against the stars of sailing. I know some of them: Scheidt was coaching Zarif in the Finn this year, so I got to meet him, but it will be amazing to race against him and all of the others. I will sail with Greek crew Antonis Tsotras, who is 28 and attended the London Olympics in 2012 with skipper Emilios Papathanasiou. We know each other already as I train in Athens in winter time, and we get along well.”

The Opening Ceremony for the Star Sailors League Finals will take place on Monday December 3rd in the late afternoon.The Medal Ceremony will be held right after sailing on Saturday December 8th, on a big podium on Montagu Beach and will be followed that evening with the Gala Dinner with the Prize Giving Ceremony at Nassau Yacht Club.

The action will be streamed LIVE on the Internet with expert commentary from special studio guests. On the water, the latest in hi-tech camera technology, as well as Virtual Eye 3D Graphics, will provide thrilling viewing. 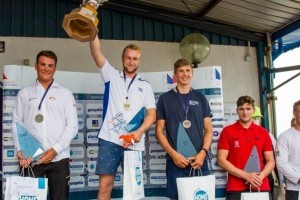