Dalin says that the technical problem was he had no wind

With the top three boats within 84 miles of each other and Yannick Bestaven now just 13 miles behind second placed Thomas Ruyant, and 120 miles back from them Damien Seguin, Louis Burton, Jean Le Cam and Benjamin Dutreux are scrapping over fourth place. With less than 500 miles to Cape Leeuwin the fleet is as compact as to be almost a re-start with 40 per cent of the course sailed.
Leader Dalin grimaced this morning, "Look I am not going to complain but the the fact that between that big low pressure we had three days ago and the very light patch I went through yesterday think I have lost enough. I was losing 16 miles an hour yesterday. When you know that you are fighting hard to win every miles that was hard to take."

The numbers tell the story. Over the past 24 hours Dalin, who has lead since November 23rd  made an average of 13 knots against 17 of Ruyant. But meantime Yannick Bestaven maintained a constant average 19 knots. At 72 hours ago, Maitre CoQ IV was 360 miles behind Apivia and over 100 behind LinkedOut. Today Bestaven is virtually by side with Ruyant and a few hours of sailing from Dalin.
"I know that of course everyome has been speculating about technical issues. But my techncial problem with no wind. Apivia is doing fine ” Dalin said this morning.
“The bleeding is almost stabilized, but not completely. I'm going to continue to lose a little more." Dalin says.

At 45 ° South, while the fleet is still descending towards the navigation limit set by the Australian resscue services the temperature has dropped. The wind conditions are not very stable. This morning large black clouds and gusts of 30 knots were keeping the leaders on their toes.
And while the fight for fourth sees a lot of lateral separation between Louis Burton, always in the south and Benjamin Dutreux, to the north, Damien Seguin and Jean Le Cam are sailing almost in sight of one another often within five miles of each other.
At the other end of the field Jérémie Beyou has crosssed three miles behind Sébastien Destremau. The two crossed the Cape of Good Hope at around 0100hrs. this morning. “I spoke on the VHF with Sébastien. It feels really good, and good to see people around I wanted to be at the back of the pack before the Cape of Good Hope. It was important for me to achieve this goal, it's a small victory. "

Beyou is thankful for small wins

Beyou is happy to have reached the goal he had set himself: to catch up with the tail end of the by the time he reached the Cape of Good Hope.

"I had a good day yesterday, I finally managed to get back into the fleet. It's good to see people around. I have just spoken to Sébastien Destremau on the VHF, it was nice to speak with someone in person too.

This is the objective I had set myself before the start. Before Good Hope, I wanted to make the reach the fleet. The first goal achieved. It was important for me. And then to have found the means to get the boat moving properly up to there. These are small victories, you have to take advantage of them... Well, after 24 days to go to Good Hope... that's a lot!

The weather hasn't been kind to us, but we are here. I hope that the next stage will be easier. Until this morning, the sea and wind conditions were quite violent. I can't wait to find myself  in better conditions ahead of a front so that the boat more easily.

We are reaching Seb. He is 3 miles ahead of me, but I can't keep him in sight with the sea so rough. I'm also going to put in a gybe in a little while, we're going to be on the same trajectory.

I am getting a lot of encouragement and it feels good. I want to sail the boat back to the finish in good condition. I'm trying to be a bit more in charge than I would usually and really to find the best mode. The boat can be tough, and I am looking to be the most fluid and flexible as opposed to rigid in my way of sailing.

The wind oscillates between 13 and 29 knots. All night long, it's been like that, with a very choppy sea. It's not easy to find an average setting. There are fewer and fewer squalls, the front is moving towards us, the wind will shift to the north during the day. It's all grey". 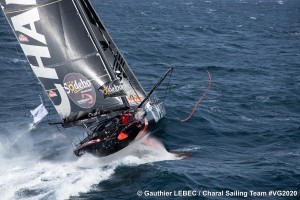 The new RP-Nauta 100 Morgana leaves for her Maiden Voyage