The final fleet races concluded this morning, leaving defending World Champion Torvar Mirsky at the top of the seeding going forwards in this competition, however the stories of the day were defined by fantastically close match racing as GKSS Match Cup Sweden welcomed the knockout stages to take 17 teams down to 12.

Ian Williams faced Markus Edegran in his Repechage Stage pairing today, a lower seed on paper but this event is known for throwing its fair share of surprises. Edegran, only joining the Tour in 2017, gave his all and was certainly helped by M32 long-time crew member Philip Carlson onboard.

A surprising pre-start ensued in race three with Williams luffing to get clear of the pin, still not quite laying the line the Brit tacked on to port in the final seconds but didn’t give Edegran enough space to pass clearly and having gained such an advantage, was given a string of penalties to get him behind the American. In the fourth race the shoe was on the other foot as an almost mirrored manoeuvre from Edegran left him with a penalty, with Williams sailing on to a 3-1 victory.

In the only match-up to go the full distance, local Måns Holmberg was hungry for payback on Taylor Canfield who has had the better of the Swede at GKSS Match Cup Sweden and the World Championship in China during 2017, both times in the Super 16 Stage. Canfield looked dominating during match one and two, leaving Holmberg to go back to the drawing board heading into match three. The Swedes certainly dug deep, won the start and led US One around the course, greeted by a roaring applause from the crowd in the grandstand and on the rocks of Marstrand.

After a technical issue in the pre-start which caused the US One crew to lose the main traveller, the pair were faced with a sudden death match point. Blow for blow the two remained even around the first lap and through the final upwind. At the final cross before the weather mark Canfield slammed a tack on top of Holmberg. In a hurried luff by Holmberg, the umpires green flagged the incident with Canfield doing all he could to avoid contact between the boats. With that it was a race for who could bare away, get the traveller on and head for home the quickest. Sadly for local fans here on Marstrand, Holmberg was hit with curse of Canfield yet again.
In the other Repechage Stage matches, Nicklas Dackhammar took the all-Scandinavian affair 3-0 over Jonas Warrer to advance to the next round, while Price beat the only other Dane in the competition, Joachim Aschenbrenner, in three straight bullets.

Dackhammar’s Essiq Racing Team feel on fire at this event with Nicklas commenting, “The start is always an important part in match racing. But when you sail the rest of the course good it becomes really hard to catch up and thats what we did today.” The all-Gothenburg team is a big favourite with the crowds on the island and they certainly feed on the appreciation they receive. “The spectators here in front of us feel great. We definitely hear them cheer for us and it definitely helps us.”

Price was certainly the favourite going into his match, having spent the off-season training in his own M32. However the team pointed out that one-boat training is no comparison for getting out to race with others. “The first pre-starts of the year, but we just built on what we learnt last year. A few hiccups off the line and Joachim pounced on that to overtake us, but we were fighting and managed to get back back pretty quickly.”

At the boat pick this evening, top seed Torvar Mirsky chose Harry Price for the Quarter Final Stage. Yann Guichard and Sam Gilmour decided that they wanted to take on the crowds as well as a match racing opponent as they picked the only remaining locals in the competition, selecting Johnie Berntsson and Nicklas Dackhammar respectively.

All that picking leaves a tantalising WMRT classic in the final Quarter Final Stage as Taylor Canfield was left to match Ian Williams. The two have battled many times over the history of the Tour and enjoy a friendly, sometimes fierce, rivalry. It will be a match not to miss tomorrow.

In the women’s fleet, as the Qualifying Stage concluded it was Sailing Team NZL skippered by Olivia Mackay who flew to the top spot, giving them the pick going forward to Saturday’s Semi Final Stage.

The overnight leader, Renee Groeneveld dropped a couple of scores in the two morning races, putting her into the Sail-Off spot to face Portugal’s Mariana Lobato in the first knockout stage. The Dutch skipper, former Olympic match racer and Nacra sailor, showed her match racing prowess as she took a 2-0 lead.

Lobato, also a former Olympic match racer from the London 2012 games, struck hard in the third to take a convincing lead. In the fourth and final match Groeneveld, who except for dropping two races this morning has looked dangerous in the boat, won the start and led Lobato around the course. Pre-starts were the key to this pairing, with all four races being dictated by the four-minute pre-start sequence. Strong match racing manoeuvres, often not seen in the multihull era of WMRT, left the opposition high and dry in multiple cases.

The men’s Quarter Final Stage will run tomorrow, with the women sitting out until Friday’s Semi Final Stage. Racing commences at 10:00 local time as more wall-to-wall sunshine is forecast with a slightly lower breeze of 6-8 knots. 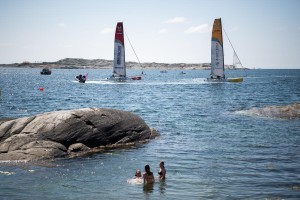 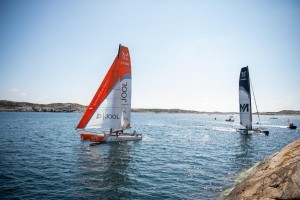 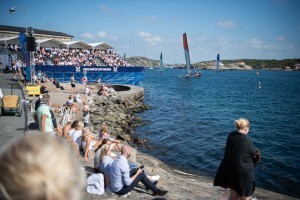 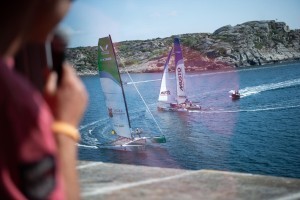 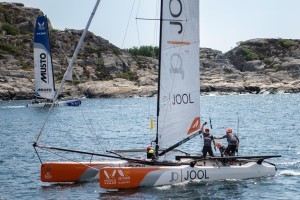 Fincantieri: Vard will build a new ship for Hapag-Lloyd cruises