After five days of glamorous conditions in Marstrand, GKSS Match Cup Sweden delivered crowd pleasers all round in its 25th anniversary year, with local victory in the GKSS Women’s Trophy and a photo finish for the WMRT Open Class.

Competing for the GKSS Women’s Trophy yesterday was M32 and WMRT regular Anna Östling, up against the very experienced and former Olympic match racer, Renee Groeneveld. Östling looked dominative in the first two matches as her experience in the boat was clear. Groeneveld threw down a world-class match racing game, but each time Östling had the perfect response.

At 2-0 down Groeneveld knew she had to pull something out of the bag. In the pre-start both boats were up against the rocks on Marstrand island, stalling speed neither wanting to lead back to the line. As the gun sounded Östling led, just, but the crew had an override and lost control of the gennaker, allowing Groeneveld to take the lead.

Into the first upwind gate, the Swedish team were back just ahead and managed to tack just in front of the Dutch. With no overlap, Groeneveld was forced into a difficult situation. She tried to slow and go below but ended up missing the mark. From that point the race was over as Team Anna opened up a strong lead through to the finish line and took the series 3-0.

Not since 2015 have the fans on the shore had a local winner to cheer, and not since 2005 in the Women’s class, so Anna Östling and her crew were certainly popular today.

In the WMRT Open Class, a great duel was set as Yann Guichard, looking impressive all week with his boat handling and match racing game, was up against the six-time World Champion and 2011 Match Cup Sweden winner, Ian Williams.

Neither Williams nor Guichard were playing up to the media with the usual fighting talk which can be expected ahead of a WMRT Final, a sure sign both skippers knew it was to be a closely fought final. Guichard has been unstoppable in boat speed since day one of this regatta, but of course taking on Williams in a match racing competition was to be a tall order.

In match one, after what appeared a relatively tame pre-start from the shore, Ian Williams was over the line early and was forced to allow Guichard past to clear his penalty. From that point the Frenchman had a clear run around the course and extended his lead to win the first.

In the second, Guichard was again ahead from the start but this time the British team of GAC Pindar was sailing much quicker and kept on the heels of Spindrift Racing, but at the final top mark Guichard chose not to be drawn in to Williams’ match race baiting and he sailed off to another convincing win. From the commentary booth, World Champion Torvar Mirsky commented, “Ian Williams is trying to engage and I think he has been surprised at the match racing skill of Guichard.”

With Spindrift Racing at match point, just one win away from taking the GKSS Match Cup Sweden trophy, Ian Williams struck back. In the pre-start the Brit used the rocks to get out of Guichard’s trap very cleverly and led off the start line. Guichard’s boat speed was, as ever, constantly high but Ian Williams was back in his usual grove and could hold off the French through all six legs to take victory and bring the scoreline to 2-1 Guichard.
As the wind continued to build up to a solid 15 knots, the stage was set for another match point spectacular, this time with winning momentum on the side of the GAC Pindar team.

A tight pre-start ensued in the fourth, Guichard swinging his bow under Williams looking for a luff in the final seconds but Williams held strong and Guichard swung clear.

Coming into mark three Guichard owned the favoured right side, but in came Williams from the left, tacking inside the zone and Guichard failed to give enough room, copping a penalty to let Williams into the lead and extend away.

After Guichard convincingly took the first two matches, it seemed this pairing would not be so exciting as the hype indicated, but the experience of Williams to take back two must-win races setup a spectacular winner-take-all final race at GKSS Match Cup Sweden.

At the start, Williams to windward, the pair crossed the line dead even. As they split and simultaneously rounded the downwind gate, the two were bow-to-bow through to the next mark. On the second upwind, Guichard crossed ahead just metres before the final mark. As the Frenchman powered downwind, an ever catching Williams caught new air and flew to close the gap right down.

Coming at the finish line as the metres closed down, Guichard was slowing and Williams was building. The crowd in the grandstand were on the edge of their seats and with a perfect view of the photo finish they roared to see Yann Guichard’s Spindrift Racing win by just a metre.

“It was so crazy.” Said Guichard directly after the win. “I was so proud of the team. The last leg was completely crazy. At the windward mark we were so close. What an amazing week for us, a first win on the World Match Racing Tour. I believed we could lose it. A small mistake, we gybe with no dagger board. But, we won!”

Speaking from the prize ceremony, runner-up Ian Williams said. “I am pleased with the performance of Team GAC Pindar today, but Yann and his Spindrift Racing were too good for us on the day. We are now looking forward to Risør in two weeks and hopefully getting our revenge!”

Guichard finished by saying. “We have not had much time to practice this winter, but we spent a lot on that last year and now we have built a good playbook. Everybody keeps saying Guichard is fast, he’s fast. But I don’t know if I am an expert in match racing. But now definitely I am better in the pre-start. We won yesterday against Dackhammar and today won four of the five starts.”

In the Petit Final Stage, Olivia Mackay took 3rd place in a 2-1 victory over Australia’s Clare Costanzo. In the Open Class, local skipper Nicklas Dackhammar gave the home fans something to cheer about as he took down Harry Price 2-0, his best result yet at GKSS Match Cup Sweden.

Next up for the World Match Racing Tour is Risør, Norway as the Tour stays in Scandinavia. The event will run 26-29th July. 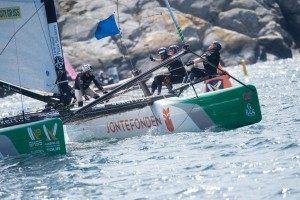 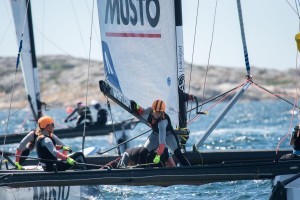 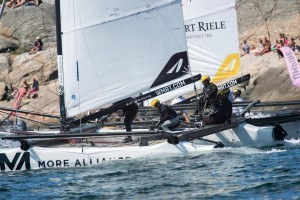 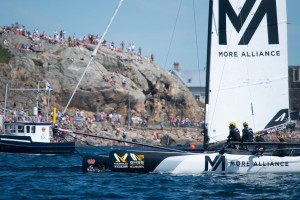