Dackhammar and Mirsky through to Match Cup Norway Quarter Finals

The first teams are packing their bags this evening having been dispatched after two of the four flights from the Repechage stage of the World Match Racing Tour’s Match Cup Norway were completed.

While the sun remained out, the picture postcard town of Risør in southern Norway took on a different complexion today. The wind was light and easterly, blowing across, rather than along, the fjord, and the ultra-short course that had to be set proved tough for competitors and race officials alike.

Yesterday Williams, Robertson, Warrer and Holmberg finished top four in Qualification, causing them to fast track directly through to the Quarter Finals. This left the remaining eight to be split into pairs to race the Repechage.

In the inter-Swede contest, young blade Nicklas Dackhammar beat Johnie Berntsson 3-0. Dackhammar and his ESSIQ Racing Team managed to win all three of the reaching starts. Only in the second race did Berntsson look threatening when on the second upwind he gained the power of the right enabling him to cross ahead of Dackhammar. Sadly on the next downwind he was penalised for a boundary infringement, handing the race to his opponent.

“We are happy with the result, but it was a really tricky today with the wind from the east,” said Dackhammar. “Yesterday it was more normal sailing. Today it was more shifty and puffy and it was harder to keep the boat behind you.”

Dackhammar observed that racing today perhaps left the Repechage winners in a better position than the four that fast-tracked through to the Quarter Final stage yesterday. “They haven’t sailed today - they have been sitting ashore. In Marstrand three of them were knocked out directly in the Quarter Finals. Sailing today, if you win, is good because it means you have had one more day of racing and of match racing, whereas when they have only been fleet racing.”

The Torvar Mirsky versus Daniel Bjørnholt match also went 3-0 in the Australian match racing veteran’s favour. Their third match took place after a pause to wait for the wind to fill in. When it did, it soon dropped leaving the two M32s to ghost around the course. “The wind was forecast to die out so it was nice that we had that 2-0 lead going into the shifty race,” said Mirsky. Despite the light conditions Bjørnholt clung on tenaciously until he picked up a penalty for a boundary infringement, effectively concluding the series for his team.
Match Cup Sweden winner Yann Guichard looked set to go 3-0 up too after winning the start of the third race. However en route to the reaching mark his opponent PJ Postma picked up some private wind and was able to roll the French team. Gaining and also with rights, coming back from the starboard side of the second beat, Guichard dialled down Postma and led for the next lap until the Dutch Olympic Finn sailor managed to sneak inside of Guichard at the top mark, the French team also picking up a penalty. With the wind fading, this left them at 2-1, albeit in Guichard’s favour.

“It was a tough day,” admitted Guichard. “We got good starts, but the last race was a bit difficult. We had a penalty at the top mark after we hit racks going into the last leg. It is a tricky place when it is so light and shifty and gusty. But we are still leading 2-1…”

Only one Repechage match was sailed between Harry Price and local Norwegian hero Petter Mørland Pedersen which went the way of the Australian team.

Tomorrow the forecast is again for the easterly wind direction but with substantially more pressure. While this will present even greater problems for competitors and race officials alike, it should provide high entertainment for spectators. A sunny weekend in Risør is likely to see the town packed with tourists, as local organiser, journalist Mikkel Thommessen explained: “There will be the remaining matches of the Repechage, before we go into the Quarter Finals. The wind should be 16 knots, then dropping to 7. We hope there will be a good spectator turn out - everyone is welcome to come down and watch the racing.”

Meanwhile spare a thought for those already knocked out – Johnnie Berntsson and Daniel Bjørnholt. “The event overall is excellent,” said Berntsson of Match Race Norway. “The racing we had yesterday was probably the best M32 racing I’ve ever done. The wind was terrific and the arena is great by natural design. We’ve really enjoyed it.” 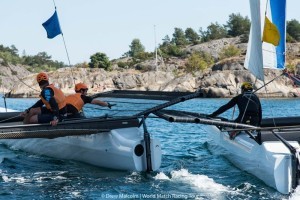 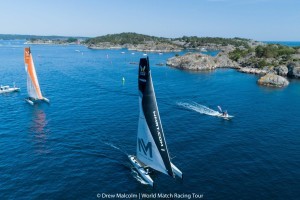 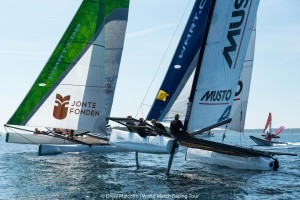 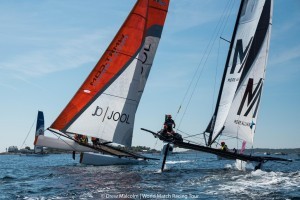 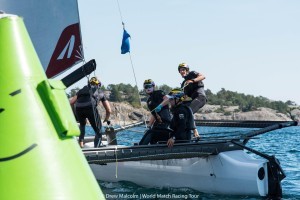