Climactic finish in store for Swan One design classes

Climactic finish in store for Swan One design classes

After four days of intense racing at the 38th Copa del Rey MAPFRE, competition is about to get that bit more serious.  Heading into the final two days, the leading boats in the Swan One Design classes may look to be sitting pretty, having built up solid leads over their closest rivals, but a new scoring system introduced this year by the Real Club Náutico de Palma means those in pole position are less secure than they might seem. For the record, Leonardo Ferragamo’s Cuordileone heads ClubSwan 50, Luis Senìs Segarra and Porrón IX top Swan 45, while Natalia Brailoiu’s Natalia is winning in ClubSwan 42.

With four race days of varied conditions completed, the Copa del Rey Mapfre has concluded its Qualification Series and is now entering the Final Series: two days of competition, with a maximum of four races, to determine the overall winners in each class. As part of the new system, each competing yacht enters the Final Series carrying a points total equivalent to its class position at the end of the seven races sailed over four days. Whatever the advantage built over the past few days, the front-runners have a lead of only one point over second place.

For Nautor’s Swan and its yacht owners, the Copa del Rey has magnetic appeal. “Being at the Copa del Rey MAPFRE with 31 Swans racing is a great sensation,” says Enrico Chieffi, Vice President of Nautor’s Swan.  “The venue, the racecourse and the weather conditions in Palma are what every racer is aiming for.” But, the event is about more than simply racing, as Mr Chieffi explains: “The atmosphere is also amazing, great competitiveness during the day, friendship and fun post-race. It is for these reasons that we have chosen to have a star guest at this edition, the new ClubSwan 36. We are here this week running test sails with clients and friends, waiting impatiently for her first race outing at The Nations Trophy later this year, in October, here at the Real Club Náutico de Palma”.

Yesterday evening, Swan Owners were treated to a special event hosted at the BMW e-mobility stand. The event was an occasion to celebrate once again the partnership between the two brands, with the ClubSwan 36 moored in front as the guest of honour. As well as socialising, guests were able to learn more about the BMW e-propulsion system.

ClubSwan 50
The seven-point lead garnered by Cuordileone during the Qualification Series belies the closeness of competition. The Italian crew have only won two out of the seven races. Their secret to success has been the ability to avoid the big number result which, with 14 boats in the ClubSwan 50 class, is no mean feat. Ferragamo’s worst score is a fifth place. By contrast, the results of Stefan Heidenreich’s Onegroup have bounced between a bullet and a disqualification. Lying in sixth overall, the effective reset button means the German crew are not out of the running.

“Today was a very good day. A kind of revenge for yesterday, when we had a really black day. After sailing the upwind legs really well, we messed up the downwinds and even had a protest which we lost,” explained tactician Jochen Schumann. “It was good to show that we are competitive with a good win, leading from start to finish. So, we are pleased and now we have the big final!”

“I think we were well-prepared, but we have got one new trimmer and it took a bit of time to become a better team,” continued Schumann, adding, “But this new format allows everyone to still win the Copa del Rey, so it is very close. It is only five points difference for us and, with four races, not so bad.” 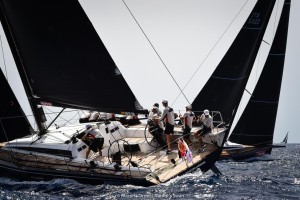 Bavaria Yachts is exhibiting at all the major boat shows