A world premiere for catamaran sailors who love to speed across the water as fast as possible – but on their own – is coming to Düsseldorf, Germany: TOPCAT GmbH, from Inning am Ammersee, is exhibiting its new K3X model for the first time at the international water sports exhibition, boot (20 to 28 January). The 4.92 metre (16-foot) long and 2.44 metre wide GFRP catamaran with computer-optimised hull shape, large sail area of 33 square metres and efficient trimming system is aimed at single-handed sailors with performance and racing ambitions. It costs EUR 12,500 (without VAT) and can be seen in hall 15, stand G58, which is situated in the passage to hall 14.

“While maintaining the well-known and popular simplicity of our daggerboardless boats we want to create a new performance class with a highly attractive price-performance ratio and which offers a real alternative for advanced single-handed sailors”, explains TOPCAT Managing Director Pablo Walden. For the first time there will not be a basic “Classic” variant. For sailing schools, boat rental companies and recreational sailors who also want to sail two-up, the slimmed-down “Streamcut” model has been created. This costs EUR 10,000 and has a mainsail, jib and an optional furling gennaker.

With the successor to the popular K3, the German catamaran builder is consistently pursuing its path of modernising the model range of 15 to 18-foot boats. The 4.50 metre (15 foot) long K4X had already been introduced in the summer and its hull design was preceded for the first time with computational fluid dynamics simulations (CFD). The Ushaped frame (formerly V-shaped) prevailed on the K3X as did a negative-rake bow (wave-piercer design, which cuts through the waves instead of “bouncing” over them) and a widened upper section. These so-called chines generate dynamic buoyancy, therefore minimizing the risk of capsizing through nose-diving. The entire development of the hull has been rewarded with an “innovation voucher” from the Bavarian Ministry of Economic Affairs and Media, Energy and Technology.

The hull volume of the TOPCAT K3X is optimised for an average crew weight of one person, including equipment, and covers the typical bandwidth of sailors of different weights with sufficient tolerance. The distance between the front and rear beam has been shortened. The longer bow and centre of gravity that is now further aft give the boat smooth directional stability. The design displays its benefits during manoeuvring in

Particular, because the underwater hull – which now has significantly greater volume – does not dig in so deeply and is easier to “turn on a sixpence”.

At first glance, the novel 15.3-square-metre Pentex mainsail on the 8.2 metre high K3X mast (as on the K2, instead of 7.60 metres on the K3) catches the eye. It has been cut to be long and narrow as a decksweeper, i.e. its front half reaches right down to the trampoline. This enlarges not only the sail area – with a favourable pressure point (because it is low) – but also simultaneously reduces pressure equalisation on the windward and leeward sides of the sail around the foot. The narrow cut means that the boat can sail for longer at maximum speed with increasing wind. A split mast will be tested in 2018 which will facilitate transportation of the boat on a roof rack instead of a trailer – and simplify winter storage.

With an increasing breeze it will also be possible, to trim the mainsail using a more efficient cunningham while standing on the trapeze. A ring guides the cunningham on the trapeze, which means it is always close to the sailor. This saves exhausting work with the main sheet and underlines the boat’s racing capability. Further benefits include the ball bearing traveller and a mainsheet with an 8:1 advantage system and Harken blocks.

As a single-handed cat, the K3X, like its predecessor, has no jib but a 17.7-squaremetre gennaker that is mounted higher on the mast than before. The solo sailor can change the length of the trapeze while standing on it, which enables him to quickly prepare for a course change – and therefore his position too – from an upwind to a downwind course and vice-versa. The first World Championship to be held in Jurmala, Latvia during August 2018 will reveal who can do this best. 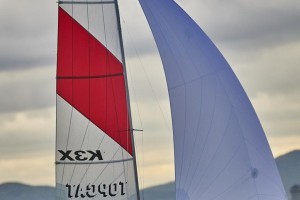 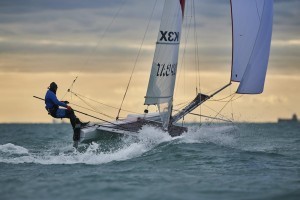 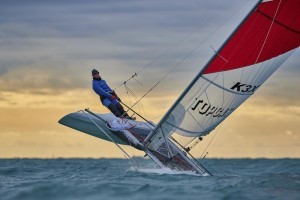 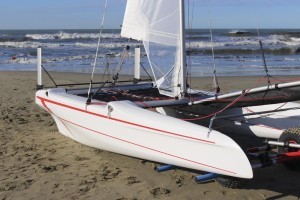 L'Eté, a new daysailer presented at Boot in Düsseldorf

World premiere of the Topcat K2X allround catamaran at 'boot'