With a second place finish just behind Quantum in the only race run today, Azzurra is in third place at this event, tied for points with the American team. The 52 Super Series sees Azzurra in first place overall in the provisional standings. Provezza wins the Puerto Portals Sailing Week.

When the boats docked out this morning, the final day of the Puerto Portals 52 Super Series raced in the waters off Palma de Mallorca, there were 6 teams in the arc of just 7 points from each other. Any one of them could have won the event. The breeze kicked in a bit late and a bit light, 8 knots from the southwest that gradually built to12.  When the first start was postponed to 2:45 PM the Race Committee decided not to run the second race. The final results saw the Turkish team aboard Provezza, helmed by Peter Holmberg, on the top spot of the podium for the first time.  Tied for points in second and third places respectively were Quantum and Azzurra; this because the Italian team got one less win overall than the Americans at this event.

After getting a good start on the pin, Azzurra arrived at the upwind mark practically side by side with her closest rival. Quantum had the inside and Azzurra had to leave room for her manoeuvre. Azzurra pressed her rival as hard as she could even though there were not too many situations that offered a tactical edge. The boat flying the Yacht Club Costa Smeralda’s burgee finished in second place, just one boat’s length behind Quantum. Bronenosec finished third while Provezza was the event’s overall winner. This is the first time that the Turkish team has won at a 52 Super Series event even though they have come close in the past.

All the teams joined Provezza’s celebration at the prize giving ceremony, a demonstration of the esteem and sportsmanship that unite the teams that participate in the 52 Super Series.

The five 52 Super Series events held in 2017 have seen five different teams finish in first place, proof of the high level of preparation and professionalism to be found on this circuit. Azzurra is still at the lead of the 2017 52 Super Series and is currently three points ahead of Platoon and six points ahead of Quantum. The final event will be held from September 19th to 23rd at Mahon, Minorca.

Quotes of the day:

Riccardo Bonadeo, YCCS Commodore: “Azzurra has held on to her leadership in the 52 Super Series, and the end of this season is keeping us all on the edges of our seats! On the part of the entire Yacht Club Costa Smeralda I want to congratulate our club members and Azzurra’s owners, the Roemmers family and all of Azzurra’s team. Thank you for the wonderful gift that you are giving us for the gala dinner that will be held to celebrate the YCCS’ fiftieth anniversary. I’m glad the three all Roemmers brothers were aboard at this event: Alberto at the helm, and Pablo and Alejandro in other races. It has been a real treat to have Cathrine, Pablo’s wife aboard for a few races as she brought the team good luck. Let’s hope she can come back for the final event in September in Mahon. Thanks again to all.”

Alberto Roemmers, owner/helmsman: “It was a difficult week at the start for us, but good overall. I’d say we had a black Wednesday with two seventh places, but luckily we recovered later. Today was a good day for us: we’ve ended this event tied for points with Quantum and overall in the Series have gotten ahead of Platoon. So I’d say it was a good week, there are fewer races left in the Series and we’re still leading.”

Guillermo Parada, skipper: "I think we raced well again today. In the first race we were very close to getting the lead at the top mark, but unfortunately Quantum managed to overlap us then overtake us. We kept them as close as possible for the whole race and in the last run when they had some trouble with their kite, we managed to catch up a bit. In the end they beat us by one length, so overall we had a good race. Unfortunately, we didn’t win, but going into racing today was very exciting because there were so many teams separated by so few points. Overall it’s OK, we sailed properly even though we weren’t always lucky and we’re happy for Provezza who has finally gotten a win. They were very close to winning a few times, but it never happened, finally today it did. We have had five different teams in first place at the past five different events and that says a lot about the level of this fleet. The upcoming event in Mahon will be all on. We have very little advantage even though we’re still in the lead, but the five final days in Minorca are going to decide everything.”

Vasco Vascotto, tactician: “Today we’re all happy for Provezza, a team that has been racing on this circuit for a long time with an owner who has invested time and resources to finally feel the joy he feels today.  On our part, we have sailed well and I’m happy. We recovered well from a couple of errors that were just a momentary setback. We still have Series leadership overall and are even a little bit farther ahead than we were coming into this event. This year we’re going into the final event with our heads held high, last year at this time we were working hard to turn a loosing season around, something that we only managed to do in the final two events. I hope that Azzurra’s current lead will be a nice fiftieth anniversary present to the YCCS on the part of all of her team. We are proud to be YCCS club members.” 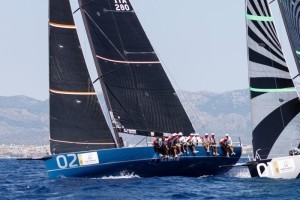 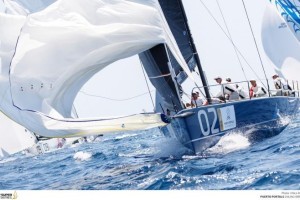 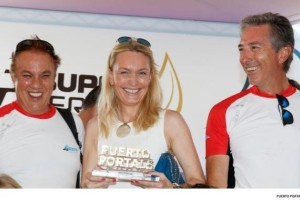