With first and third place finishes in today’s two races Azzurra, the TP52 that flies the Yacht Club Costa Smeralda’s burgee, is leading the Provisional Results at the fifteenth edition of PalmaVela. Racing is scheduled to continue tomorrow starting at 12 noon.

There couldn’t have been a better way to start off the new regatta season: a first and a third place. Right from the start, Azzurra is in the lead of the TP52 Class at PalmaVela, an event that is a testing ground for the boat flying the Yacht Club Costa Smeralda’s burgee and for most of her direct adversaries that will be competing in the upcoming 52 Super Series, set to begin on May 22nd in Šibenik, Croatia.

The fleet of ten TP52s had to wait almost two hours before gradient winds from the south west built up to 12 knots with peaks at 15 managed and edged out the morning’s breezes from the north east. The Racing Committee still managed to get two windward/leeward races in today.

Azzurra won the first race with an excellent final leg, when Santiago Lange’s tactical calls allowed her to catch then pass Alegre and Phoenix, who where in the leading two positions up until then.

In the second race, Azzurra managed to get free from the traffic that slowed her down at the start, rounding the first upwind mark in third position behind Gladiator and Platoon. Along the course Platoon managed to capture first place, recovering positions after placing ninth in the day’s first race after receiving an OCS penalty. Azzurra held on to her third place position, holding off Quantum to the end.

Provisional results see Azzurra in first place with four points, followed by Gladiator with six points and Alegre with nine. Platoon and Quantum are tied for points in fourth and fifth places.

Tomorrow racing is scheduled to begin at noon with westerly breezes forecast at between 8 and 16 knots. Check Azzurra’s Facebook page for updates live from the regatta course.

Guillermo Parada, skipper: “We were performing well in the practice races, but it’s always a big relief to see the boat doing well in the real thing. The shore team was working very, very hard on a problem this morning, but we got it solved by 11 and we got out on the water in time. It may be early to say, but the boat feels like it’s ready to play. We made a good recovery today and that shows that we’re going well. I’m confident that we’ll arrive in Croatia in shape, but we have to stay on top of our game.”

Santiago Lange, tactician: “It’s a good start, but this is a long event. The boys did a really good job keeping the boat fast and that got us out of some tight situations. It’s all about not making mistakes, I don’t know the other boats all that well at this stage, but they look good. You need to be spot on in a fleet this tight and competitive. I felt good out there today, but fingers crossed for the upcoming season.” 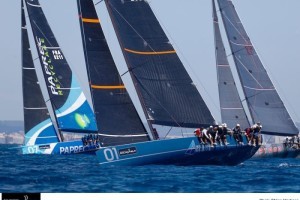 Eastern Hemisphere 2018, still no races due to shifty wind

Melges 40 at the Center of 2018 PalmaVela Racing Excitement