Azzurra wins and shows her promise at PalmaVela

Palma de Mallorca, May 6, 2018 - The boat flying the Yacht Club Costa Smeralda’s burgee won the only race run today, the final day at PalmaVela, which was a test event in view of the upcoming 52 Super Series. Azzurra will be officially baptised by the Princess Zahra Aga Khan on May 21st.

The 2018 season couldn’t have gotten off to a better start for Azzurra, who won at her debut event, PalmaVela, which was a test event in view of the upcoming 52 Super Series that will begin in Šibenik , Croatia on May 22nd. Azzurra lead the TP52 Class right from the first race at this event, where she placed first for good measure. During this four day long event Azzurra was always in the lead, even though yesterday Platoon and Quantum, the most competitive teams for last year, almost caught up to her.

Today the fleet had to wait until 2 PM before the Racing Committee began racing in winds from the southwest that were at 15 knots early on, but then died down to 11. Azzurra got a spectacular start, fast on the left on the pin while the rest of the fleet fought it out to get the best position on the Committee Boat. As soon as she was over the starting line Azzurra crossed ahead to the fleet on port tack. Only Platoon and Gladiator, who had sought out the right hand corner of the course, weren’t controlled by Azzurra. Platoon, especially, was a risk to Azzurra when approaching the first upwind mark. The YCCS boat controlled the rest of the race, lengthening her advantage on the others. Along the last downwind run, some of her adversaries changed positions in the shifty breezes, but Azzurra reigned. Sled and Quantum regained positions to second and third places passing Platoon, who finished fourth and lost her second place position overall to Quantum.

The tuning of the boat and the entire team’s hard work and training, begun from the moment the boat was launched in mid-March, are paying off. But no one of Azzurra’s competitors is going to be sitting on their hands from now until the Series begins.

Azzurra and the other TP52s are now heading over to Šibenik, Croatia where the 52 Super Series, monohull sailings most competitive event, will begin on May 22nd. This latest version of Azzurra, the fourth TP52 to bear this glorious name, will be baptised as is tradition by the Princess Zahra Aga Khan on May 21st., the eve of the beginning of the new season.

Yacht Club Costa Smeralda Commodore Riccardo Bonadeo had these words: “What a start! Congratulations to all for this wonderful win. We know just how competitive and difficult the upcoming season will be and Azzurra is the 52 Super Series defending champion. But surely this win is a good sign. We know that this team never rests, so we hope it’ll just get better. Thanks to everyone and especially to the Roemmers family, our club members and Azzurra’s owners.”

Guillermo Parada, skipper: “We are happy of course but it wasn’t an easy win by any means. The wind conditions were very, very challenging but Santi did a good job picking the side and we had a good start and were able to cross the fleet on port and were able to control it. We’re happy because today our performance in light air was competitive and we were able to hold our edge. But the teams that were strong last year are still strong and the season is long, but obviously this is a good beginning.”

Santiago Lange, tactician: “I’m happy, we all are, especially because this morning there was pressure on us to perform, but it’s always good to have pressure. The team has been working very hard over the winter and they did awesome work to get the boat ready. Everything is so well organised that I’d hate to be the one that makes a mistake. It’s all about keeping learning: just because we won this event doesn’t mean we’re all set for the season, it’s all about staying focused and keeping on working hard.” 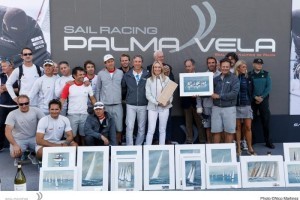