Azzurra takes the lead at the Rolex TP52 World Championship

Azzurra takes the lead at the Rolex TP52 World Championship

With first and second place finishes in the first day of racing, Azzurra, the boat flying the Yacht Club Costa Smeralda’s burgee, has captured the provisional lead at this World Championship event and is tied in the Series overall with her historic adversary, Quantum. Platoon is currently in third place in this event that will end on Saturday, July 21.

The forecast for wind was correct with north-westerly breeze at 20 to 25 knots today in Cascais. Today was the first day of racing at the Rolex TP52 World Championship, which is also the third event in the 52 Super Series.

The Atlantic Ocean was the stage for the recap of the passionate duel between Azzurra and Quantum: both placed first today in the race that the rival came in second in. Azzurra won the first race handily and in the second race her team was determined and sailed well with excellent boat speed. These combined with skilled manoeuvring in stronger winds and a hard chop allowed Azzurra to recover after a start that was less than excellent and finish second behind Quantum after alternating positions with Sled and Alegre. Third place for Platoon who is tied for points with Alegre, fourth.

In the first race Azzurra’s tactic call was to take the starboard tack and sail on the right hand side of the course, a choice that put her at the head of the fleet right from the start. She lengthened her lead during the race. Quantum, fifth at the first mark, recovered positions and was second at the gate, a position she held on to until the finish. Luna Rossa was very unlucky and had a hydraulic problem with her stays shortly after the start and had to withdraw from racing.

In the second race Principal Race Officer Maria Torrijo had the pin moved a little bit forward so that the left side of the course was better and there wasn’t a crowd of teams trying to start off the Committee Boat. Azzurra started upwind from Quantum and towards the left of the line but wasn’t as fast as she wanted and slipped back in the early part of the race. But she showed her stuff and recovered positions at the mark and again at the gate, vying with the leaders and recovering positions along the final run passing from third to second place and leaving Alegre to finish third.

Guillermo Parada, skipper, has these words: “We always said that in windier conditions we sail better and today we proved it. This was our best first day so far this season and we have to keep it up: we want to have the chance to win this event. In the first race we did a pretty good job of controlling right from the start even though Platoon was a bit aggressive and cut us off from the Committee Boat. But we were patient and by sailing on the right we recovered the half-length that we lost at the start quickly. In the second race we didn’t get a good start so I’m not totally satisfied with our day. We drifted a little at the start whereas Quantum did a better job and stayed fast. This influenced our start and the whole race. But the team sailed well and we’re tied with Quantum.”

Santiago Lange, tactician: “Obviously I’m happy especially because we sailed well, which for me is even more important than how we place at the end of the day. The team worked incredibly well, and gave me the benefit all of their experience sailing here. Manoeuvring was perfect and the boat didn’t have one single problem.”

Tomorrow racing is scheduled to start at 1 PM local time tomorrow, 2 PM CEST. Two races are scheduled: a windward/leeward race and a race that will have six mile legs with a start at the centre of the course and an upwind finish. The forecast calls for conditions that will be similar to today’s but with slightly lighter breezes. Racing can be followed in real time with commentary in English on the sites www.52superseries.com and www.azzurra.it, on Azzurra’s social network pages and on Virtual Eye. 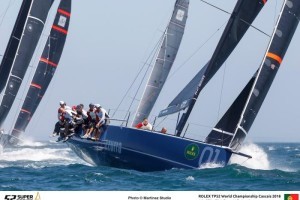 Porto Montenegro host of the sixth Superwine Festival in July

Sunreef Yachts: first look at the Sunreef 60 and Sunreef 80 at Sea