Azzurra get a win today at the Rolex TP52 World Championship

Azzurra won the first race of the day in wind at over 20 knots, but had to settle for fifth place in the second race. The boat flying the YCCS burgee has consolidated her second place overall, but she is still seven points from the leader, Quantum. Tomorrow is the final day of racing at this world championship.

It was a windy second to last day at the Rolex TP52 World Championship in Cascais, Portugal, a competition that is also the third event in the 52 Super Series. In north-westerly wind at over 20 knots with gusts at up to 25, the fleet of TP52s put on an excellent show with close crosses and fast surfing downwind.

Azzurra did a perfect first race, dominating the fleet right from her very fast start alone on the pin while the rest of the fleet was vying for the Committee Boat. Azzurra crossed the fleet on starboard tack and took control sailing more to the right as this side began to look better. After taking command on the beat, her team continued to sail flawlessly and lengthened their lead during the rest of the race. Azzurra was first well ahead of the second placed team, Sled. Luna Rossa was third while Quantum, who placed fifth, was suddenly in the lead overall by just three points.

In the second race the wind seemed much stronger on the right side, which had also been the best side so far. With this in mind Azzurra chose to start on the Committee Boat even though she wasn’t very fast tacking right away starboard. But the stronger wind didn’t give her the advantage she was hoping for while Luna Rossa and Quantum took the lead coming in from the left side. The American team was in the lead at the first mark, but Platoon was first at the gate. Even though Platoon is very fast downwind Quantum managed to pass her, placing first. Sled was third both in the race and overall, and is now four points behind Azzurra.

Skipper Guillermo Parada had these words after the fourth day of racing at this event: “At the end of the day nothing has really changed in terms of our score against Quantum’s. What we’re really sorry for is that we missed a couple of good opportunities in the second race after winning the first one so well. In the first run we missed the chance to get ahead of Sled at the gate for a communication error, along the second we had a mechanical problem with the gennaker sheet that got tangled. We lost three or four lengths there that we managed to recover and we finished fifth, but we really slipped behind for a minute there. Tomorrow conditions should be similar to today’s and we’re counting on getting a chance to sail well. Let’s see how the first race goes tomorrow, then we’ll know if we still have a chance at winning this championship.”

Giovanni Cassinari, mainsail trimmer: “The first race was perfect, we got a good start and from there we lengthened our advantage on the rest of the fleet. The second race was harder and we had to recover. It wasn’t easy but it was fun. In these stronger winds we got some excellent planing and surfing, I like racing here.”

Tomorrow will be the final day of racing with the start scheduled an hour earlier: at noon local time, 1 PM CEST.  Racing can be followed in real time with commentary in English on the sites www.52superseries.com and www.azzurra.it, on Azzurra’s social network pages and on Virtual Eye. 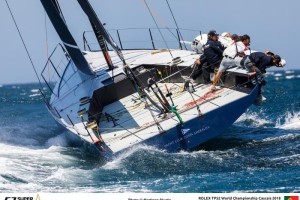