Azzurra is second at the Puerto Portals 52 Super Series

Azzurra finished the fourth event in the 2018 season in the best of ways winning the final race in the Puerto Portals 52 Super Series and ending the event in second place behind Quantum, the leader in this year’s circuit.

The final day saw two races run in breeze from the southwest at 12 to 13 knots that quickly died down to 9 knots. A situation that was difficult to read and for tacticians to call. In race 8, the day’s first, Azzurra had a hard time along the first beat rounding the mark ninth. She managed to recover positions by sailing on the left along the run and did well on the second beat to finish fourth. Provezza, a team that is not always performing evenly but that often manages to get results, won the race showing how many top teams there are in the highly competitive 52 Super Series circuit. Quantum, placed second in this race, consolidating her leadership with just one race left to go.

In the second race of the day and the final race of this event Azzurra put on an excellent show. She battled with Luna Rossa pre-start for the pin which she got, but then had to wait for the left side to pay off. Azzurra got the puff she wanted before the mark which she rounded first followed by Luna Rossa. The two teams rounded the gate side by side. Luna Rossa was slightly ahead and chose the left. Azzurra chose the right then tacked to the centre, a tactical choice that made the difference. From there she lengthened her lead and went on win, followed by Platoon, who, with second and third place finishes today, is looking more and more threatening in the Series overall.

The Puerto Portals 52 Super Series Sailing Week ended with Quantum on highest tier of the podium followed by Azzurra and Platoon. The next event in the 2018 season will be in Valencia, from September 18th to 22nd. Quantum’s 30 point lead overall means that she is almost untouchable, but the games are open for second and third place overall.

Riccardo Bonadeo, YCCS Commodore: “Good job! Second place behind a team that is dominating the season is excellent incentive to keep on fighting and to reach for the top at the upcoming event, the final one of the 2018 52 Super Series, in Valencia in September. My congratulations to Azzurra and her team for the second place they worked so hard for and that also consolidates her position in second place overall in the season. I want to thank Azzurra’s owners Alberto and Pablo Roemmers and Pablo’s wife Cathrine who has become Azzurra’s Ambassador in the One Ocean Foundation to protect the world’s oceans.”

Skipper Guillermo Parada had these words: “We kept pushing until the very end of this event and I’m happy because we improved steadily over the week. Unfortunately, the penalty we got yesterday cost us the chance to fight for first place at this event but that’s the way it goes. We need to look forward and will arrive in Valencia, the final event of the season, sailing better all the time. It’s nice to come back to the dock feeling that we did a good job and we feel that way today. In the first race we weren’t very lucky and rounded the top mark last but we kept cool heads and finished fourth which really isn’t bad. In the second race we had a real battle with Luna Rossa to get the pin. We won and were able to round the mark first and increase our lead to the end. It’s a good way to finish even though we wanted a little more, but Quantum sailed more consistently and it’s the consistency that pays.”

Santiago Lange, tactician: “It’s always nice to sail well and finish an event on a positive note and today we did. At the beginning of the first race we suffered a bit but made the right choices and finished fourth. In the second race we went for the pin and the rest just followed. I’m really happy, happy with the team and looking forward to the next event.” 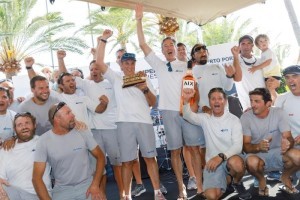