The final event in the 2018 52 Super Series is set to begin tomorrow in Valencia. Azzurra is currently in second place in the season overall and hopes to hold on to that position in racing that will conclude on September 22nd.

A fleet of eleven TP52s is lined up in front of the Veles e Vents building, symbol of the historic 32nd America's Cup, for the final event in the 52 Super Series 2018. A large part of the sailors in this highly competitive and professional monohull circuit already knows the waters off Valencia well, having competed here in the last America's Cup that was raced in monohulls back in 2007.

The TP52 version of Azzurra has a special relationship with Valencia: in early 2015 the third TP52 version of Azzurra was christened here and in 2012 the boat flying the Yacht Club Costa Smeralda’s burgee won the first edition of the 52 Super Series after a week of intense sailing, fighting off her long-time rivals, Quantum Racing.

Going in to this year’s final event the American team has an advantage over Azzurra, the second placed team, that seems impossible to recover: 32 points. The real fight will be for the second and third places on the podium and anything can happen. Azzurra hopes to consolidate her second place but she is trailed by just five points by both Platoon and Sled who are tied for third place overall followed by Luna Rossa at 12 points.

Azzurra has to keep a careful eye on these teams, but no team can be taken lightly in a fleet that is this competitive. Any minimum error or second of hesitation can cost points and positions as Azzurra learned well in the early stages of the season.

Azzurra performed well in today’s Practice Race run in winds at up to 10 knots. She finished the race by crossing the finish line, while her team usually choses to finish a Practice Race outside the mark for good luck. Phoenix finished second followed by Platoon and Provezza.

Skipper Guillermo Parada had these words: "We have to concentrate to stay on the positive trend of the past two events and try to hang on to our second place. That’s the most realistic objective we can have. We would like to win this event; if we did we’d be sure to finish the season in second place. It won’t be easy, we are followed closely by three teams and the entire fleet is motivated to give it their all. We have to be open and flexible to strategy changes, we can’t narrow our vision to a fight against one or two other teams.”

Riccardo Bonadeo, Commodore of the YCCS: "The 2018 season was as competitive as we expected it to be, every year it gets a little harder, but that’s the essence of sport. Azzurra has struggled, but her team worked hard and fought back. They have been doing a magnificent job, in this final event they will give it their all to end the season on a positive note. I want to thank the Roemmers family twice as much as ever, not just for the contribution they have made to the sporting team, but also for the support that Pablo and his wife Cathrine are offering to our One Ocean Foundation to protect the seas.”

Racing will begin tomorrow at 1 PM in winds that are predicted to be light and from the northeast. Live streaming with commentary in English direct from the regatta course will be available on the websites 52superseries.com, azzurra.it and on the 52 Super Series YouTube channel. 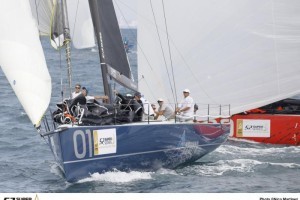