Azzurra has finished the 52 Super Series 2018 in third place, tied for points with Platoon in second place. Quantum is the season’s champion but the winner of the event in Valencia is Luna Rossa.

Everyone who was hoping to see the fight to the end for second and third places in the 52 Super Series 2018 overall will just have to wait: the battle between Azzurra and Platoon never got off the ground because conditions were too light for racing, and the Race Committee didn’t manage to get a race in today. Overall positions stayed the same as yesterday’s so Azzurra has ended her 2018 season tied for points with Platoon who will keep her number 02 standing like last year thanks to the two first place finishes she got here in Valencia. Azzurra, the team flying the Yacht Club Costa Smeralda’s burgee, only placed first here once. Quantum Racing is the 2018 season’s champion, while Luna Rossa has won this event.
After 42 races run over the course of the 2018 season, it’s a shame not to have been able to fight to the end for second place against a team, Platoon, that was tied in points with Azzurra. But, as skipper Guillermo Parada pointed out, the same situation presented itself the previous season in Mahon where there was no racing on the final day. That year Azzurra won while Platoon and Quantum Racing were left hoping for a last chance.

That this year’s 52 Super Series season was going to be more difficult than ever was evident right from the start. The prediction that the final result was going to up in the air right to the end was also correct. Except for Quantum, with the winning couple Dean Barker/Terry Hutchinson aboard. Luna Rossa is in fourth place for the season, just six points behind Azzurra. The bear hug between Azzurra’s skipper Guillermo Parada and his former tactician Vasco Vascotto, now aboard Luna Rossa, was a fine show of heartfelt sportsmanship.
“Our friendship,” they said, “is even stronger this year when we were sailing against each other, it’s easy to be friends when you’re sailing together. “
“The hardest moment,” said Vascotto, “was when we parted paths last year. This is my first sailing family  and it’s still is even though I’m not on their team.”

Guillermo Parada, skipper: "Third place is no disgrace even though we were shooting for second. Too bad we didn’t get to sail the tie break and are third, but that’s the way it goes. Last year it was the other way around and missing sailing on the last day worked in our favor. Congratulations to Quantum who sailed better than any of us, we got close to them several times but never managed to get ahead. Naturally it’s easy to cry over points lost over the course of the season, even over this week, and especially yesterday, but wanting to be reasonable I’d say we paid for points lost in Croatia early in the season. Today we ended the season sailing much better. We’ll look back over the season soon, we have to learn from our mistakes and figure out where to improve. That way we’ll be back stronger than ever next year.”

Riccardo Bonadeo, Commodore of the YCCS: "The 52 Super Series is over, I want to thank and congratulate the Roemmers family and the whole team. The results aren’t quite what we were hoping for but we fought hard. That’s the sporting spirit and getting a podium finish in a circuit that is this competitive is more than satisfactory. I am very happy for everyone and for the yacht club that we represent.”

Bruno Zirilli, navigator: “Incredibile! We knew that this season was going to be a fight to the end, but to finish third in a tie break without being able to sail the final races was not a situation we were prepared for. I like to think that the wind is getting even for having helped us last year when we won without having to risk on the final day. Congratulations to Luna Rossa for winning the Valencia event, but amongst good friends dockside I want to joke that if there was an Italian derby going on between us, we won it!” 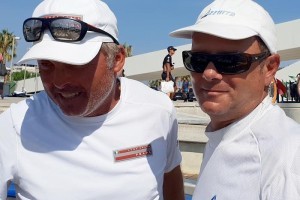 Maltese Falcon and Silencio triumph at the Perini Navi Cup