Today, just before a training session was about to begin in the waters off Valencia, the name of Azzurra’s new tactician was announced. The job will go to Michele Paoletti who will be sailing aboard a TP52 again after his successful bids in the MedCup where he won the championship in 2005 as tactician aboard Mutua Madrilena.

Born in Trieste in 1974, Michele Paoletti competed for Italy in the Sydney 2000 Olympics in the Soling Class together with Nico Celon and Dede De Luca. He also won the European Match Race Championship in 2001. Up until the year 2003 Paoletti competed at a very high level in the Laser class and subsequently on a Finn he won two national championships and has campaigned both for the London and at the Rio de Janeiro Olympic Games.

Paoletti also participated in the 32th America’s Cup in Valencia as strategist aboard Mascalzone Latino. His CV lists wins in various keelboat world championships from the IOR Quarter Ton Class to the Maxi Yacht Rolex Cup. Paoletti also won many titles in One Design circuits such as the Melges series. Aboard J/70s he has sailed and won as tactician in three European Championships including the last one held in Malcesine, Lake Garda in 2019. Just this past December 8th he won as tactician the J/70 South America Championship in Punta de l’Este.

“The 52 Super Series is the queen of keelboats both from a sporting and from a technological point of view,” Paoletti said. “It’s an honour for me to be sailing once again in the TP52 circuit especially aboard Azzurra. I’m now part of the team that is the 52 Super Series’ defending champions and it’s a very special group of people and of sailors. I’m picking up the baton passed to me from two top tacticians who have sailed aboard Azzurra in the recent past: Vasco Vascotto and Santiago Lange. Azzurra has won four of the past eight 52 Super Series that she has competed in: this will be a great stimulus for me to do my best aboard the boat flying the YCCS burgee.”

Santiago Lange, Azzurra’s tactician in the past two seasons, has left the team to prepare with Cecilia Carranza for his Olympic bid in Tokyo 2020 aboard their foiling catamaran Nacra 17.

Best wishes to Lange and Carranza and a warm welcome to Paoletti aboard Azzurra. 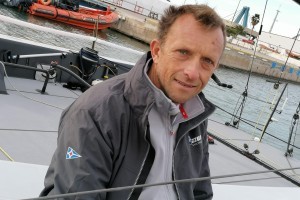