A small development team of Emirates Team New Zealand’s designers, shore crew and sailors, supported by Luna Rossa, North Sails and Southern Spars, have been busy developing a prototype soft wing sail and rig to be part of the AC75 class of boat to be sailed for the 36th America’s Cup in 2021.

“Although we have been working collectively and quietly developing this concept since last year, it is not a huge secret in terms of what we are doing because the intention is to have a tested rig and sail concept that will become part of the AC75 class rule.” said Project Co-ordinator Steve Collie.

“We have been developing this concept towards the class rule in Auckland with representation of the Challenger of Record, Luna Rossa’s designers here as part of the testing process.”

The objective of the testing in Auckland is to validate a concept which the Emirates Team New Zealand designers have found to be promising in initial simulations.

North Sails and veteran America’s Cup sail designer Burns Fallow has been a key part of the process from the beginning.

“We started off back in August with a clean sheet of paper and some ideas and came up with this mainsail concept.”

“We have done enough work on it in simulation to know that it is a fast concept, but you have got to do the basic things like tack and gybe, and make the thing go up and down and just little things like that before you commit to this for the next three years.”

The concept being tested currently has a large ‘D’ shaped section mast, developed and built by Southern Spars, with separate mainsails on either side of the mast providing a smooth transition from the mast to sail in its aerodynamic shape.

“In addition to conventional mainsail trimming controls, this concept allows for twist and camber control at the head of the mainsail through a control arm on top of the rig which will be very interesting for us sailors especially transitioning back from the AC50 hard wing sails.” said Glenn Ashby.

While the hard wing sails of the AC50’s were extremely efficient, they required 20 people to launch and retrieve the wing before and after each day’s sailing.

“We want something where teams can take the mainsail down and leave the rig in at the dock as well as potentially make mainsail changes on the water, but have something that aerodynamically is superior to a conventional mainsail without being heavier.” explained Collie

“Essentially we are looking for a new advancement in mainsail technology that we would like to think can trickle down to other boats.”

As with all America’s Cup class developments weight is always a big issue, but especially so with the AC75’s because of their self righting ability it is important to keep weight aloft to a minimum.

After a handful of days testing the roughly 1/3 scale model on Auckland Harbour the initial tests proved pretty positive for all parties involved in the project.

“To see it in reality, even in the small scale it’s a big step in our confidence, that this thing is something a bit different and should be pretty good.” concluded Fallow.

“Obviously this is a very early concept and test, but the main purpose is validate that our thinking is heading in a realistic direction. It’s huge step towards the finalisation of the class rule which is due to be released on March 31st.” said Ashby 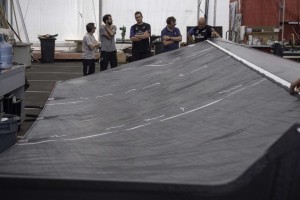