Like any good final day of a regatta, the PRADA ACWS Auckland was wide open for most teams to sail their way onto the winner’s stage, with a clean couple of races and maximum points getting them onto the podium. One of many hurdles for the teams to overcome was the light and tricky breeze, which forced a late shift of the racecourse further up the Rangitoto Channel to get the best from the 7-13 knots northerly wind.

After suffering a very close loss to American Magic in the first-round robin and tied on 3 wins apiece, the result of this race would have a significant effect on the overall outcome of the regatta, and so Emirates Team New Zealand’s focus was on cleaning up their mistakes to secure that vital point.

After a delay in the days start procedure, Emirates Team New Zealand and American Magic were flying into the start box at over 30 knots in just 9 knots of wind speed.
Emirates Team New Zealand decided to stay high and wide in the box, turning back down the line early, with the Americans looking slightly late. The end result had both boats starting at the extreme ends of the line at the gun, bow to bow, and heading out on starboard tack.
The first cross as the kiwis came back on port saw American Magic helmsman Dean Barker and tactician Terry Hutchinson tack in the face of Peter Burling, who managed to maintain speed and live on the hip of American Magic before eventually having to tack away to the left again - it was all on.

American Magic protected the right but the kiwis kept it close rounding the first mark 0:12 behind. On the downwind run both were doing over 30 knots in just 10 knots of wind, with Barker maintaining his lead, just rounding the mark only 0:03 ahead of Te Rehutai, with the kiwis opting to head out on opposite tacks, to keep out of phase with Patriot.

American Magic on starboard crossed ahead of Emirates Team New Zealand but chose not to tack on their face, allowing the kiwis to extend out to the righthand lay line who were still 100m behind - this new class demanding even faster decision making than ever before, with massive losses if you choose to cover an opponents move even seconds too late.

It was the opportunity Burling and crew were looking for at the next convergence, and when American Magic on port were forced to dip the kiwis, they grabbed a narrow lead as they headed out to the starboard boundary for their final tack into the top mark.
However, it was that tack that proved to be the costly mistake that would effectively hand the race to Emirates Team New Zealand as American Magic struggled through a bad one, labouring to get back on the foils and eventually rounding 0:54 astern of Te Rehutai.
Emirates Team New Zealand free to sail their own race and extend their lead around the remainder of the course to take another vital point.
Blair Tuke’s reaction as they extended their lead, “All good.”

The last race of the schedule and the regatta result was on the line.
The stakes; if Emirates Team New Zealand win they take the regatta, if Luna Rossa win it would be a three way tie with American Magic and the Italians.

Both boats stayed apart in a relatively quiet pre-start, the wind fading to just 8-9 knots, meaning the key the objective was to keep on the foils. In the final twenty seconds before the gun, a left-hand shift meant Emirates Team New Zealand could not lay the pin and were forced to tack to port, Luna Rossa hitting start line, pulling out to a 150-metre lead over Emirates Team New Zealand - in a now familiar position behind with plenty of work to do.

All the way up the first leg, Luna Rossa simply matched the kiwis, maintaining a comfortable lead rounding the top mark 0:32 ahead as the wind dropped to just 6 knots. Not enough for Emirates Team New Zealand to pop back up on the foils as Luna Rossa flew off down the run before also dropping back off their foils in a low speed gybe, turning the race into a sprint get back into flight mode.

It was slow and stressful but Peter Burling and crew used a boundary to boundary run to gain maximum advantage, popping up on the foils and abruptly turning a remarkable 800 metre deficit into a 500 metre lead before Luna Rossa were up and foiling again.

The remainder of the race saw a knife edge dance for both boats to maintain speed on the foils, each knowing a single mistake would be costly. Emirates Team New Zealand did a bad tack off the foils, and in that slow speed build allowed Luna Rossa to within 100 metres up the run until the final top mark, the kiwis 0:18 seconds ahead, causing supporters of both teams to hold their breath.

Peter Burling and his crew eased Te Rehutai down the final run to cross the finish line and win the Prada ACWS Auckland by just 0:16 in a light wind slugfest, that saw technique and smart tactics secure the win.

Foil Controller Blair Tuke: “It was tough coming off the foils, so we were happy to get back up again, but a bit more happy when they came off foils! The wind got down to 6 knots at one point, so it was an awesome effort to get going by the lads and keep it going for the rest of the race - so all good. It has been an epic days racing, American Magic & Luna Rossa are certainly going really well in these conditions - great to secure the win in front of a fantastic crowd out there.”

"This is great for the team in general but there is plenty more work to do", was Tuke’s summary as he took off for the Official Mumm Champagne moment. 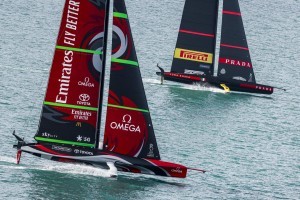 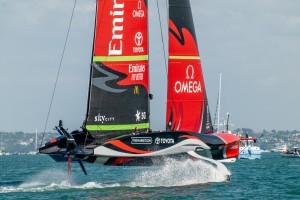