The three-day delay announced by Race Management last Saturday, due to poor weather conditions at the start of the course, was undoubtedly a very good and wise decision. However, these extra hours on land have seemed mighty long for the solo sailors competing in the legendary transatlantic race. At least, that's the case for Charles Caudrelier, skipper of the Maxi Edmond de Rothschild, who made no secret of how eager he is to finally be taking the start of his first Route du Rhum – Destination Guadeloupe. Tomorrow, at 14:15 hours local time, the 138 contenders will finally be able to bid farewell to the corsair city and point the bows of their boats towards the open ocean! It is on a beat, zigzagging their way forward that the large fleet in the 12th edition will set a course for Pointe-à-Pitre. It's a passage which is shaping up to be quick for all the classes, with the Ultims potentially able to make landfall in the West Indies in just six days!
­

The routing cell, from Lorient to St Malo.
­
­
"We've taken up residence in a house looking out over the sea along the Lorient coast! For the past two days, Stan Honey and I have had a front row seat to really appreciate the storm which delayed the start and it's been intense. This atmosphere, up close and personal with the elements, is the perfect way to get ourselves into the groove...", admitted Erwan Israël, one of the mainstays of the routing cell organised around Charles Caudrelier for this Route du Rhum.

As with the Transat Jacques Vabre, where they really excelled, Stan Honey and Erwan Israël will form a duo that is as effective as it is complementary. Already hard at work in Lorient on Brittany's Atlantic seaboard, the two strategists will be joined tomorrow evening by Franck Cammas and Morgan Lagravière, who will also put their vast experience and their incisive knowledge at the service of the Maxi Edmond de Rothschild and Charles Caudrelier.  In the meantime, the two sailors will accompany the skipper of Gitana Team to the start line, before treating themselves to the traditional leap off the back of the boat into the sea in the closing minutes of the start procedure.

"According to the latest forecasts, we should have a favourable WSW'ly wind at the start with 15 – 20 knots of breeze. As a result, we'll have an upwind start and it will be important to manoeuvre well to get to the gate at Fréhel. If conditions play out as planned, we should make the headland at around 15:30 hours local time. There will be quite heavy seas with waves of around 1.5 metres. The exit from the English Channel is forecast to be tactical and physical with a lot of manoeuvres to perform", announced the router.

More traditional weather en route to Pointe-à-Pitre
­
Back in Saint Malo this Tuesday morning for the final pre-start skippers' briefing, Charles Caudrelier couldn't disguise his desire to get going! "When the delay was announced, I was already into my start routine. I opted to head off and spend a few days with family and that was the right choice for me. Now I'm here in Saint Malo I'm keen to get out on the water and set sail, especially given the fact that the weather offered up by this second slot really appeals to me. It's shaping up to be a real battle royal. It's going to be strategic, and I think it'll be interesting to follow. Race Management made a courageous decision and today we'll be able to sail a great race as a result! The weather pattern is more traditional than the one we'd have had if we'd set sail on Sunday and all in all it won't be so full-on. Indeed, a start on Sunday would have involved taking risks in bad weather. Here though, we'll have to negotiate a very powerful front rolling through on the second day, with fairly heavy seas, but there will be some exit routes if need be. One thing for sure is that it'll be game on in this Route du Rhum. In the forecast conditions, the boats will be pretty close to one another. We'll have to keep on top of trimming the boat and work on the trajectories. There will likely be a lot of manoeuvring along the way and that's what I love!" stressed Charles Caudrelier.

You've got the picture! The various scenario still under study by the routing cells already seem much more classic, or at least similar to the courses sailed in previous editions. Everyone agrees that this Route du Rhum 2022 is gearing up to be quick, very quick, since the first Ultims are expected offshore of the islet of Tête à l'Anglais from next Tuesday, 15 November, after some six days of racing...

Final night on the mooring ­
­
Exiting the Bassin Vauban last Friday 4 November, to the great delight of the racing fanatics crowded around the dock to bid farewell to the solo sailors, the Maxi Edmond de Rothschild has since been wisely moored offshore of Dinard, in the Baie du Prieuré, accompanied by the seven other trimarans signed up for this category. The five-arrow giant has spent the past five-day wait under escort too. In fact, various members of the shore team have been taking it in turns to keep watch aboard the boat in groups of two, night and day, like proper sentries. This surveillance is crucial in terms of safety of course, as well as being a way for the team to stay in contact with the boat prior to the big day.

This evening, for the final night on the mooring, David Boileau, boat captain on the Maxi Edmond de Rothschild, and Morgan Lagravière, trusty crew and replacement skipper for Charles Caudrelier, will have a full moon to accompany them on their watch.

Charles Caudrelier will climb aboard the boat mid-morning tomorrow (around 10:30/ 11:00 hours) after a final onshore weather briefing with his routing cell. Then it will be time to make for the Pointe du Grouin, from where he is due to set sail on his very first Route du Rhum! 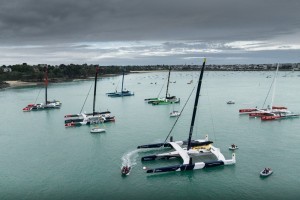 Jeanneau and Multiplast join forces for the Sun Fast 30 OD

The Rhum is an immense pleasure for sharing

Route du Rhum 2022: the Ultims at the gateway to the trades