An absolutely breath-taking finale. At 12:44 h Spanish time, on Tuesday 8th May, MAPFRE sealed their third leg victory of the Volvo Ocean Race 2017-18, after an absolutely stunning come-back in the last few miles of the leg. After moving up from fifth to third place in the last 48 hours, Xabi Fernández’s team headed into the final stages of the race, ready to give their utmost in the fight for victory, which they finally managed to sweep in a breath-taking moment slipping past Bouwe Bekking’s Brunel just metres from the finish line. Their new triumph places MAPFRE back at the top of the general leaderboard with three points’ advantage over Dongfeng Race Team.

“To win here in Newport is incredible, as it is is a very important leg for us,” explained Xabi Fernández on arrival at the dock. “We spent the whole leg trying to make a come-back, which was really complicated until the last 48 hours. Our actual aim was to finish one position ahead or behind Dongfeng, and not only did we pass them, we were able to win the leg - it’s incredible!”

A historical come-back 200 miles from the finish

The leg began well for MAPFRE, who left Itajaí in first place, to face the first few miles of the leg at the front of the fleet. However the unstable weather conditions, were soon to complicate life, and after being caught up in a dense combination of cloud cover, squalls and storms on the sixth day of sailing, in just a matter of hours Xabi Fernández and his crew were more than 30 miles behind the leader.

Moreover, an electrical problem led to a complete “black-out” onboard the Spanish boat, preventing them from using the keel normally, and forcing the crew to work even harder for the majority of the leg, in the attempt to recover miles, and move closer to the leading group. It was no easy task, but the team were determined they would not give up the fight for the very best result possible.

With just 200 miles before crossing the finish line, the Spanish boat made an absolutely legendary come-back, placing them back in the fight for victory.

24 hours before the finish MAPFRE had already moved into third place, and were closing in on Brunel and Dongfeng, who were fighting tooth and nail for leadership of the leg.

As Xabi describes, “Only two days before we had had our hopes on getting through the low pressure system, which was going to give us a night with a lot of wind. We knew that we were going to put everything we could and more into it, since the weather pattern would provide us with options of getting close to them.”

With barely hours until the finish, and the fleet advancing painfully slowly towards the line, in extremely light winds and the current against them, Xabi Fernández and his crew were able to overtake Charles Caudrelier’s crew on the Chinese boat, and began to press down hard on Bouwe Bekking’s Brunel.  At 12:44 h Spanish time they managed to slip past the Dutch boat just metres from the finish to claim a stunning first place.

Back at the top

Their new result means MAPFRE has recovered leadership of the general Volvo Ocean Race leaderboard ahead of Dongfeng Race Team, now in second place and three points behind the Spanish team. With three legs to sail before the end of the round-the-world race, Xabi Fernández and his team are well aware that they must do everything in their power to hold onto their position, knowing that it will be no easy task.

“We are leaders again, and we are really happy because it is important. There are three points between us and Dongfeng, and that is not a lot, since there is a double-scoring leg coming up, but it is obviously better to be ahead than behind,” claimed the Basque skipper.

Whatever the case may be, MAPFRE do not lack neither determination nor motivation, and there is absolutely no doubt that they will fight up to the very end to defend their leadership of the Volvo Ocean Race 2017-18.

The next leg from Newport to Cardiff, in Wales, will set off on 20th May. It will be the third and last, of the double-scoring legs.

There wasn’t actually a time when we ever thought about winning, we were simply fourth, with Dongfeng second, and that was something we would have signed for two or three days ago.

On being one man down:
In many ways it has been trickier, because you obviously have less hands for boat handling, and on these boats every manoeuvre is complicated. Also Sophie is injured and is recovering, but she will come here now and will join us for the next leg. However, we moulded well, all worked a little harder, and it went really well.

This has been quite a tough leg for all of us, particularly because of the start, where me made a few mistakes, and it kept us away from the leaders of the fleet. Over the last few days the weather gave us the chance to move closer, and we made good use of it. The last two hours were absolutely heart-stopping, not only because there wasn’t any wind, but also because we had the current against us; the first four boats were separated by just five miles! Anything could have happened! We finally managed to win the leg and we are all really happy.

On her thoughts about MAPFRE’s electrical problems and black-out:
We were suddenly plunged into darkness as you might say, and the first thing I asked was, “Was that the Bermuda triangle or what? I thought we were still quite far away!” Being so used to having numbers and information always at hand, it is very difficult to suddenly be completely blind. But we managed to deal with it really well, we are all good sailers and along with our natural ‘feeling' and a few ‘strings' we can all sail the boat. 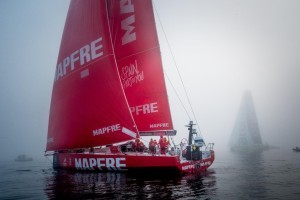 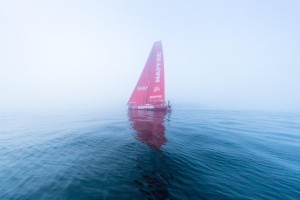 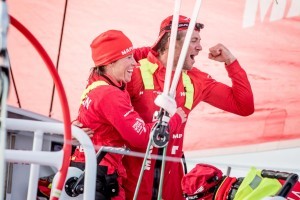 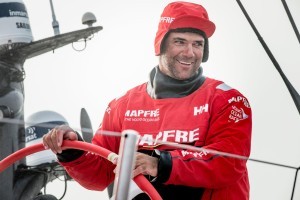 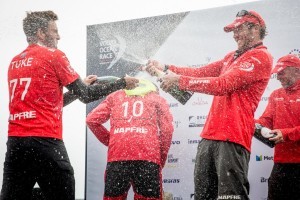 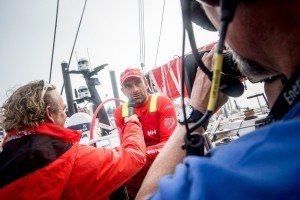 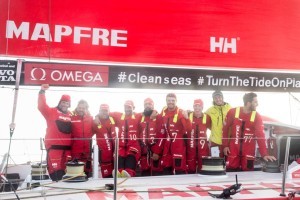