Lack of wind was the defining factor this afternoon for the start of the penultimate tenth leg of the Volvo Ocean Race, where MAPFRE once again began at the front of the fleet. The 1300 miles from Cardiff to Gothenburg in Sweden, will include several hurdles and transitions, and many decisions to be made.

As the MAPFRE skipper declared just before leaving the dock in a sunny Cardiff,

“We are ready to go, everything is prepared and we are going to give it our all.”

“This is a short leg, and as we have said on many occasions, they are tougher than the longer legs,” continued the Basque skipper, “It is a five-day sprint where there are a number of critical turning points, the first will be on leaving the Bristol channel, where there is a lot of current and little wind. After we have crossed over to Ireland and the Fastnet, we have another transition into a different wind. There are several tricky moments, so we are going to have to stay focussed, resting whenever and as much as we can, so we are ready to fight the whole way.”

A painfully slow start
Following a half-hour postponement and a modification of the route, (previously just two knots of wind and a rising tide creating a head-on current), the start gun finally sounded in Cardiff at 17.30h Spanish time, with a good start for the Spanish team, led by Xabi Fernández, on the right-side of the race course and stretching out ahead of their rivals.

The extremely light conditions also led to the Race Committee cancelling the windward-leeward section of the start, which would have been incredibly slow for the seven VO65s. Each team had dispatched one of their crew to the top of the mast in an attempt to locate the slightest gust from the 30-metre vantage point. As such, the start gun sounded and the fleet set off directly.

Whilst Turn The Tide On Plastic and Scallywag were forced to make a penalty turn for being over the line early, the rest of the fleet continued to float in just 4 knots of wind speed, which MAPFRE already began to use to their advantage.

The Spanish team continued at the front of the fleet, 45 minutes into the leg followed by Brunel, Vestas and AkzoNoble, all within a one-mile radius. TTOP, Dongfeng and Scallywag were one, 1.3 and 1.8 miles behind them.

Full support for MAPFRE and Spain
A few hours before the start of the leg, His Majesty King Juan Carlos, the Infanta Elena and the Chairman and vice-chairman of MAPFRE, Antonio Huertas and Antonio Núñez respectively, arrived at the MAPFRE team base in Cardiff to offer their full support for the team, directed by Pedro Campos from Galicia, and skippered by Xabi Fernández.

After attending the final crew meeting, on bidding the team farewell at the dockside, HM Juan Carlos explained,

“We have come to support the team ahead of these last two incredibly decisive legs. The team were all really excited and motivated, so we will now have to see how the race goes. Supporting from here, we will need to keep checking the tracker!” were the words of the Spanish monarch.

The leg is estimated to take approximately five days, with the VO65 fleet’s arrival in Gothenburg currently due between Thursday night and Friday. 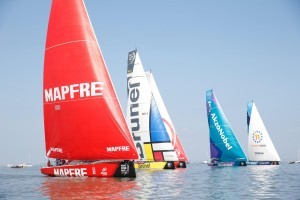 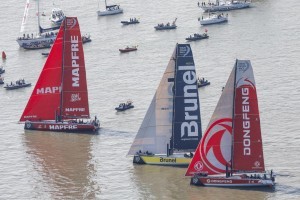 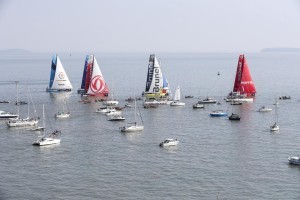 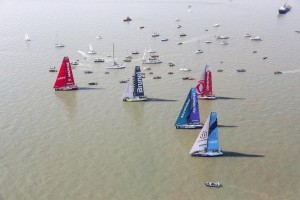 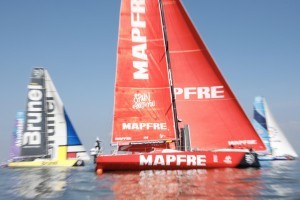