Xabi Fernández’s MAPFRE are once again overall leaders of the Volvo Ocean Race, after finishing the penultimate leg of the round-the-world race in Gothenburg last night, at 22.43h Spanish time.

The Spanish team were just 1 minute and 55 seconds away from winning the leg, finishing in second place behind the Dutch Team Brunel, who had managed to overtake Fernández’s team a little before midday on Thursday, on the fifth and last day of the race, and were involved in a fierce battle within a mile of each other right up until the finish line.

The last mark of the route, the Trubaduren lighthouse, was just four miles from the finish line. Brunel were able to hold on to their first place, with MAPFRE hot on their heels just half a mile behind them. At one time the distance between the two boats closed in to just 0.3 miles, but once both teams had gybed and begun to make their way directly to the finish line, in strong windy conditions (over 20 knots), it was clear that it was going to be difficult for any position change to occur.

On arrival the MAPFRE Skipper Xabi Fernández, shared their impressions,

“It has been a good leg, but Brunel were a lot faster than us, and we will now have to work on finding out why they were so much faster. We tried to hold on, and do everything we could, but they were able to overtake us and get a mile’s advantage, and they more or less kept it up until the end.”

The team’s watch captain Pablo Arrarte, helming for MAPFRE, (and in the last few miles), admitted the team were satisfied despite the leg being physically tough,

“We started well and sailed very well, so we are happy with how we did in the leg. The end was a little bitter because Brunel overtook us this morning. We finished second and wanted to be first because we sailed very well and we could have achieved it.”

Their second place in Gothenburg, gives MAPFRE a total of 65 points, the same as the winner of leg 10, Brunel. However the rules of the round-the-world race state that when two boats are tied, the lead goes to the team who are better situated in the In-Port Race Series, currently led by Xabi Fernández’s team with six points’ advantage over Dongfeng.

Dongfeng are now third on the overall leaderboard, with a total of 64 points, followed by AkzoNobel with 53 points, making it mathematically impossible for them to improve their fourth place overall.

“The good thing is that we are now leading, although drawn even on points with Brunel and Dongfeng [who if nothing out of the ordinary happens will win the additional point in The Hague, as the team to have sailed the round-the-world race the fastest], so definitively what happens in the next leg will decide the outcome of the race. And we are now at war to do just that,” declared Arrarte.

As such, the podium teams for the Volvo Ocean Race 2017-2018 have been revealed, yet all is still to be decided, and the order will only be known once the last leg is complete: the 700 nautical miles from Gothenburg to The Hague, to start on Thursday 21st June.

“We have been giving our absolute all for months, and now of course we have to give this one last push, just one more. All of us now have the same number of points so the winner will be revealed at the end of the leg. We have a lot of work to do this week to be ready for it,” concluded the MAPFRE Skipper Xabi Fernández. 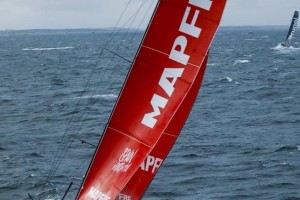 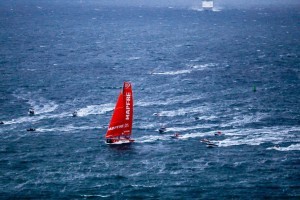 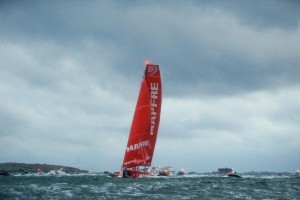 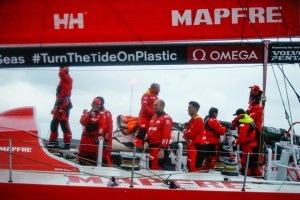