It was in Lagos, a beautiful coastal town in Southern Algarve, that the regattas were contested with excellent weather conditions and relatively flat waters; an ideal setting for a spectacular sporting spectacle! Franck Cammas, Olivier Herlédant, Arnaud Jarlegan, Mathieu Vandame and Devan Le Bihan have been progressing since the first event on Lake Garda, making strong starts and showing greater consistency. The GC32, expertly helmed by its skipper, displayed good speeds both upwind and downwind, even setting a new record with a peak of 37,39 knots (70 km/h).

Upon his return to the pontoon, the skipper reflected on these four days of racing:
“We’ve had a great week! We maintained our consistency and in the tougher situations we managed to fight and come back. We have found the right formula whatever the conditions. We contested 20 races which were incredibly open and competitive, particularly towards the finish line, with a fleet which improved with every race, notably INEOS TEAM UK. I am happy with the team’s work and the speed of the boat. For the next regattas, it will be even more competitive”.

This performance was also well received by the 60 or so Norauto employees who were present in Lagos, as well as by the European Norauto teams, according to Thibaut Derville who is responsible for Norauto’s partnerships, upon the announcement of the results:

“Franck Cammas and all the team, both on the water and on shore, have done Norauto very proud this week. It is a magnificent performance that we were lucky enough to share with Norauto's employees and partners present in Lagos. It has been a unique experience with authentic athletes. We will be there to support them for the next event on the GC32 Racing Tour. See you in Palma from the 31st of July to the 4th of August for the third event of the season!”

Partners:
In addition to being a partner of the GC32 Racing Tour, the German brand Marinepool is joining Franck Cammas’ team as official supplier for this season 2018. 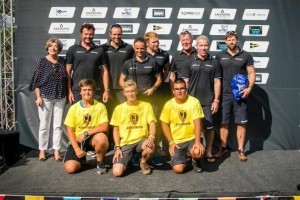 Norauto gets set for the 37th Copa del Rey MAPFRE