MACIF trimaran sets sail for the Mediterranean for the 1st time!

This summer, the trimaran remained moored to its berth, where it was dismasted, to repair the masthead. For the technical team, this was also an opportunity to check all the rigging. They also worked hard to finalise the installation of optical fibres on the appendages (rudders, foils, and centreboard). These will provide valuable information about their behaviour: "The optical fibres will provide us with data on the distortions and strain on the appendages. This will be sent directly to the multihull’s computer", explains Antoine Gautier, the engineering office manager. This real-time data will now enable the skipper to preserve the appendages if needed. At the same time they will be studied onshore for the purpose of optimisation.

At the end of the week, François Gabart will leave Port-la-Forêt together with a few of his team members, Pascal Bidégorry, Guillaume Combescure and Fred Bérat, for a week’s delivery to La Ciotat, near Marseille. This ocean sailing will enable the skipper to take his bearings. "Sailing with a crew is an opportunity to test new things and to work on the boat's performance. This delivery will serve as training for the Mediterranean record. Once in Marseille, I will have less opportunity to sail, since we have programmed a few days of public relations, so that Macif Group’s employees and the general public can get to see the trimaran.

MACIF will go into stand by, ready to make the best use of a weather window to attempt the Mediterranean single-handed crossing record. This has been held, since 1 October 2013, by Armel Le Cléac’h, on Banque Populaire VI, on a 458-mile route between Marseille and Carthage. He sailed it in 18 hours, 58 minutes, and 13 seconds (at a theoretical average of 24 knots). In so doing he improved the earlier time by Thomas Coville (Sodebo) by 6 hours, 40 minutes, and 23 seconds.

This was followed closely by his win in May on the Transat Bakerly, and then the 24-hour record, which he raised to 784 miles, at an average of nearly 33 knots. François Gabart is determined to establish a new reference time on what can be considered a real sprint across the Mediterranean, in surroundings he looks forward to seeing again. "I really love the Mediterranean. I sailed there a lot when I was preparing the Olympics and I always enjoyed the Figaro races I competed in, particularly the last, the Istanbul Europa in 2010 (Ed. winner and crowned French champion of single-handed ocean racing). It is a tricky sea with very changeable weather conditions and you need to be an opportunist. I can't wait to attempt this record."

What are the ideal weather conditions for beating Armel Le Cléac’h's record? "A Mistral wind will need to have just got up, to avoid waves, and if possible more westerly than northerly, so as not to need to jibe on the trajectory. More importantly, this mistral will need to blow us all the way to Africa, which is a fairly rare occurrence, since it usually drops just south of Sardinia."

Similar to when he was on standby in New York for the North Atlantic Record, François Gabart will need to remain patient to take advantage of the best possible window and add a second record to his performances on board the MACIF trimaran, with which he says he is "more than satisfied", a little more than one year after it was launched: "We won the first two races of the programme (Transat Jacques Vabre and the Transat Bakerly). We have a very high performing boat, which has had no major technical hitch and which offers huge potential for progress. This is all very positive for things to come."

2017: The Bridge and Single-handed Round-the-world 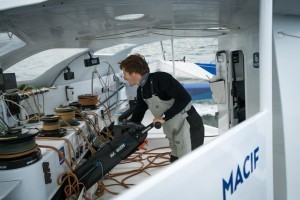 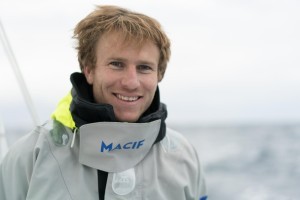 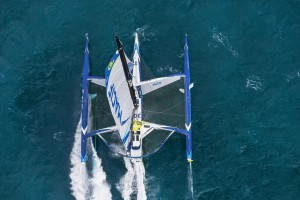