This Tuesday François Gabart has been at sea for over 24 days. The day before he crossed the 180th meridian with a stable lead of one and a half days on the time clocked up by Thomas Coville, the current holder of the single-handed round the world record. On Monday, when the skipper of the MACIF trimaran had just set a course further north, he met a floating object he did not expect: an iceberg. Now focussing on his next goal, Cape Horn, he is fighting very rough sea conditions in the Pacific.

As if to mark the halfway point of his round the world, François Gabart encountered something unexpected: an iceberg.  “It was quite surreal. I knew that I was very far south and that the water was getting cold, but the satellite had not detected any large icebergs in the area, so I was fairly confident. I was just gybing, and as I came out of my gybe I saw this lump. It wasn’t that worrying. It was even quite beautiful, but you feel that it could be a potential danger. When you see one, it’s a bit like in cartoons. You imagine that there could be fifty. I experienced a few difficult moments,” said the MACIF trimaran skipper during the radio session organized every Tuesday at the Macif headquarters in Niort, at which many of the Group’s employees are present. Fortunately, he had already set a course further north in search of more favourable conditions. “After this, the water temperature rose quickly and we all know that icebergs don’t last long in hot water. Yet, you think that there might be one wayward one, all the same, that has made its way into warm waters, so you stay cautious. I am smiling now, but yesterday, there was less of smile on my face. It sent a chill up my spine.” Literally!

Monday was emotionally-charged for François Gabart, since, just after this encounter with an iceberg, at a roughly 60° South latitude, he crossed the antemeridian (180° longitude East or West), an imaginary date line, where the time changed from Monday 27 November 23:59 to Monday 27 November 0:00, as if he hadn’t moved at all!  These are landlubber notions. The skipper of the MACIF trimaran says himself that he doesn’t have the leisure to think about this “mishmash” of time: “I follow universal time (UTC - 1 hour in relation to French time). I haven’t kept up with time zones since the start. I’m well aware that I’ll be getting one extra night than the clock says and that I’m down under, but I have plenty of other things to be thinking about and I don’t want to waste my energy on that.  The only thing that changes is that the days get a little shorter, because I’m heading east. François Gabart wants to remain focussed on the sailing the boat well, which is being tossed about again in a chaotic sea: “I am just ahead of a large low-pressure area, which has been bringing high waves with it in the last ten hours or so. I am sailing with the smallest sails possible, with the J3 to the fore and three reefs in the mainsail. The conditions should continue like this for another ten hours or so, and then I’ll gybe to return behind this low on the starboard (wind from the right). The sea should be much calmer than it is now.”

Phrase: “It would be just wonderful to reach the Horn with a little lead on Thomas’s time”

Despite slowing down late last week and again today in the rough seas, François Gabart has maintained his lead of a little over one day and a half on Thomas Coville’s time, holder of the single-handed round the world record since 25 December 2016. Naturally this has lifted his spirits: “I have just picked up Thomas’s route and I have a lead of one day and 18 hours on his time. Today, I am being battered by the waves and I’m not making very quick progress. I don’t like it when the speedo reads 24-25 knots, but when I see this lead, it’s reassuring. It is very satisfying and a good sign. I have just passed the halfway point, so any lead is a help.” And although the MACIF trimaran skipper is expecting “a few rough hours in this low-pressure system, with rough seas”, he has his fingers crossed that the end of the Pacific will go in his favour: “Behind, if all goes well, I should have a reaching tack, which will enable me to make quick headway to Cape Horn. It would be just wonderful to reach the Horn with a little lead on Thomas’s time” According to the recent routings, MACIF is expected to round the famous rock on Sunday or Monday, after roughly 30 days at sea.

After the end of last week, which François Gabart said had tired him, because of the sea conditions, making sleep and preparing food difficult, he managed to recover just under Australia, in “a relatively clear sea”. His sleep times in the last 24 hours show an increase in the number of hours (4-5 hours against 2-3). This calm (which needs to be put in perspective in the terms of the Great South, 25-30 knots all the same) gave him an opportunity to look after the small jobs that needing doing aboard, even if some of them didn’t hold: “I managed to recharge the batteries and to look after the boat, but the J2 furler system (intermediary foresail) broke a second time. I managed to roll the J2, despite the blocked furler and, for the moment, I’m sailing with a J3, the smallest sail, but given the sea at present, I’m not really sure how I am going to be able to repair it again in the hours to come. It’s not easy to cut the carbon and to do an accurate job when you’re being tossed about. I’m going to try and find an intermediary solution with the team so that I can use the J2 before Cape Horn”. High speeds, really rough seas, small jobs, time flies on board MACIF. 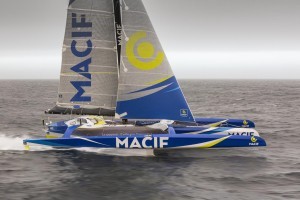 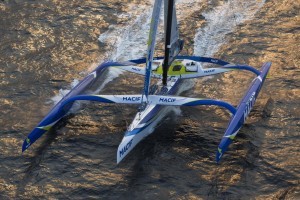 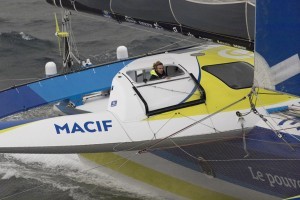 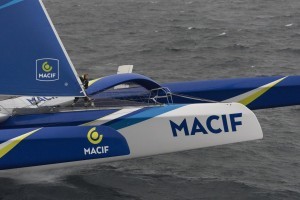 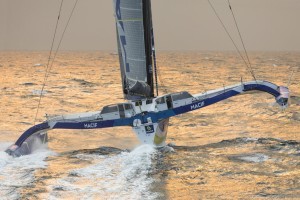 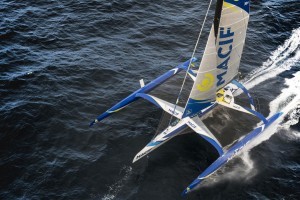 Solo round the world: François Gabart: “I can’t wait to get to Cape Horn!”