“On behalf of everyone at US Sailing, we are deeply saddened to learn about Kevin Burnham’s passing and we send our condolences to the Burnham family during this difficult time,” said Cory Sertl, President of US Sailing. “Kevin’s accomplishments as a sailor are extraordinary and his Olympic spirit is iconic. We will remember the energy he had for coaching and teaching sailing. Kevin was an inspiration to so many and will be missed by all who had the pleasure to know him.”

Burnham is a three-time Olympic sailor and a two-time Olympic medalist for Team USA. He won the gold medal with Paul Foerster in 2004 and a silver medal with Morgan Reeser in 1992. Burnham and Foerster were named Rolex Yachtsman of the Year for their gold medal performance. Burnham also won a gold medal at the 1986 Goodwill Games.

Burnham was a versatile sailor who competed in various boats and different racing formats over his exciting career. In ocean racing events, he competed at the Sydney-Hobart Race, Rolex Transatlantic Challenge, Newport to Bermuda Race, and won the 1989 Worrell 1000 Mile race. Burnham was an 11-time U.S. National Champion.

Later in his career, Burnham coached sailing athletes in the U.S. and around the world preparing them for the highest levels of international competition. He especially loved coaching youth and Paralympic athletes.

His overall positive presence, incredible optimism, and never give up attitude will always be remembered.

Kevin Burnham and Paul Foerster were interviewed by Gary Jobson on US Sailing’s Starboard Portal on August 5, 2020. Watch the interview as they share their Olympic memories and discuss fascinating stories about the 2004 Games and how the gold medal performance came together. 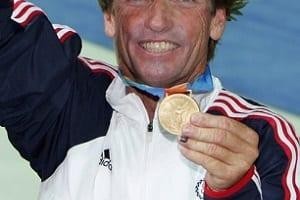 Navigators. A journey into Sanlorenzo's shipyards as part of Art Basel

Bora Gulari injured in training accident prior to Nacra 17 Worlds