Competitors in the 17th annual world championship event will arrive from Australia, New Zealand, Great Britain, Canada, France, Spain, Brazil, the British Virgin Islands, Argentina and Hong Kong, in addition to representatives from Ireland, Czechoslovakia and South Africa. At least 40 teams will come from across the United States, spurred by a sailing clinic at ABYC and the 29er U.S. Nationals July 25 to July 28.

The majority of 29er teams are expected to be comprised of two young men, but many co-ed and all female teams will compete as well. Trophies will be awarded to the top team overall, the top youth team, and the top girls team. U.S. entrants are hoping for a hometown advantage that will enable them to best third place, the highest position a U.S. team has ever achieved in this world championship event.

The 29er was designed by Australian multiple national and world sailing champion Julian Bethwaite, and first produced in 1998. It is raced in 53 countries and considered a stepping stone to higher level sailing, producing many World and Olympic champions in other classes.

This lightweight one-design boat is just 14 and a half feet long – and tippy. When not racing, both crew members have to stand to keep the boat from capsizing. When underway, one crew is extended beyond the hull on a trapeze, as the boat quickly accelerates; often exceeding wind speed both up and downwind. At the 2005 Worlds in San Francisco – the only other time the event has been held in the U.S. – these water darts were clocked at 20 knots of boat speed. Swift and skittish, 29er competition puts an emphasis on agility, skill, and brisk decision-making.

“These boats fly across the water and kids have fun; but like any other race, winning will come down to boat handling,” said Jerelyn Biehl, executive director of the 29er Class. While the 29er is considered predominately a youth boat, sailors often continue racing the class if they can maintain the optimal crew weight (240-300lbs).

Biehl, who grew up racing in this area, knows what the kids are in for: ocean rollers with lots of wind. “It’s going to be a great event. The kids are so excited to come to California, and I know the Club is going to do a great job,” she said.

Following an opening ceremony Sunday, July 30, a qualifying series will run Monday, July 31 to Wednesday, August 2. The finals series of races will run Thursday, August 3 through Saturday, August 5. Judges from Canada, Australia, Brazil, Mexico, New Zealand will oversee racing. All boats will be monitored via TracTrac so families around the world can watch the action online, and racers can later review their performances replayed on ABYC’s TVs.

After a 9:30AM competitors briefing each morning at ABYC, racers will compete on one of three possible courses at the East end of Long Beach Harbor, starting at 11:55AM. According to International Race Officer Mark Townsend, the races will take place on the Pacific Ocean off Long Beach unless winds exceed 20 knots, when they will be held behind the federal breakwater."

Both Qualifying and Final Series are scheduled to consist of 10 races each.

Championship regatta host clubs are typically picked about three years out, said Biehl, and ABYC submitted their bid for the 2017 event in 2014. The 29er organization looks for locations around the world where the most sailors will have a chance to compete, at facilities able to handle the crowd, with sufficient ability to efficiently launch the boats. In addition, they seek a superior Race Committee, with experience in high-level events.

ABYC has a world-wide reputation as a premier small boat club, with not only the capability, but also the desire to host and promote these types of events, and encourage the development of the sport, according to Townsend. He said this summer’s event is roughly the 20th world championship regatta ABYC has hosted.

ABYC was first formed in the mid-1920s, when racing was held in the Bay – establishing its foundation as a small boat club, with vessels suitable for the shallow waters. When yacht racing exploded in the years following WWII, ABYC began to host larger sailboats as well. The Club’s reputation for superior race management was first recognized in 1968, when ABYC became the first yacht club in the United States to win the St. Petersburg Yacht Club Trophy: an award presented by US Sailing for excellence in race organization and management.

ABYC won the St. Petersburg Yacht Club Trophy again in 1981, and more recently in 2016, for the Laser Mid-Winters West. ABYC and its members were also instrumental in the organization and running of the Olympic Sailing Events at the Games of the XXIII Olympiad (1984). More than ABYC 100 volunteers will participate during the week-long 29er Worlds this summer, serving an estimated 5,000 meals to the competitors, their families and coaches.

Mike Segerblom of the US Sailing Center in Long Beach, said the organization is very excited to see the 29er Worlds come to Long Beach; providing great opportunity and exposure for the region, state and nation. He acknowledged a Downing Family Foundation grant to the Center, which was earmarked for ABYC’s running of the 29er event.

The championship promises a lot of thrills and spills: as the club buzzes with enthusiastic racers, and the vibrant fleet of 29ers darts across the waters of Long Beach.

Long Beach is known for brisk and steady afternoon breeze, which will provide optimal sailing conditions for these high-performance double-handed skiffs, with their colorfully trimmed transparent sails – and exhilarating viewing. 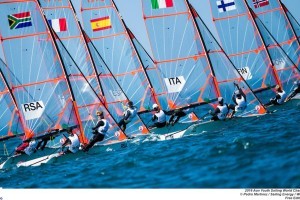 A Gentle Day in the Sunshine