LONG BEACH, CA  15 July 2018 - - After four days of lively racing – in breezes that built to the high teens Friday and Saturday, before tapering off to more moderate, southerly winds today – The Moorings 2018 Laser Class North American titles have been decided. Charlie Buckingham, USA, has won the Bruce Kirby Cup; with Brenda Bowskill, CAN, the North American Radial Champion.

Brisk conditions kept racers on their toes during the July 12 to 15 regatta, hosted by Alamitos Bay Yacht Club (ABYC). By Saturday afternoon, at the end Race Nine, ‘the wheels were coming off,’ one observer remarked. There were collisions, general recalls, knock-downs, dismastings … the recipe for adversity ‘one part conditions, one part aggression, one part fatigue’ as rivals tried to unseat the frontrunners, who have had a steady grip on the podium since Thursday.

But it was a classic case of the rich getting richer.

Olympian Charlie Buckingham, USA, who has dominated the Laser Standard division since Day One, triumphed for the 2018 Bruce Kirby Cup. With half his finishes in the regatta first-place bullets, the four-time Inter-Collegiate Sailing Association All-American, from nearby Newport Beach, held off an attack by three-time North American Champion Chris Barnard, USA, and Olympian Bruno Fontes, BRA, who finished second and third.

At the top of the leaderboard in the daunting 80-boat Laser Radial fleet is Olympian Brenda Bowskill, CAN, who never relinquished her clutch on first place. Bowskill sailed for Canada in the 2016 Olympic Games and her exquisite form had opponents noting she was ‘one with her boat.’ Fellow Canadian Sarah Douglas, another Olympic hopeful, took a solid second; followed by Joseph Hou, USA.

Hou, 18, is a member of host club ABYC, a solid competitor and “a really big asset to me, on the water,” said his brother Erik Hou, 15, who placed third in Laser 4.7. “This is my first international regatta, so it’s been great competing against people from other regions and countries, and seeing how they sail,” added Erik. “It’s been really tiring but a really great experience, and I’m having a great time. And my brother helps me out, giving me some tips.”

That paid off – putting Erik on the podium in the closely raced 4.7 fleet.

In that class, Abbie Carlson, USA, and Spencer Leman CAN, were tied or trading places throughout the regatta. In the end, Carlson edged out Leman, for the Laser 4.7 honors.

Today had begun slowly, but not only because competitors were pooped. The final moments of World Cup soccer were being broadcast, and sailors clustered around TVs at the breakfast buffet and race office. As France took the Cup, the weary sailors moved on – with Race Chair Ed Spotskey congratulating French competitors John Bernard Duler and Luc Chevrier for their nation’s win.

Then it was back to business: to wrap up the final day of racing for The Moorings 2018 Laser North American Championship titles.

More than 160 competitors travelled from 26 nations to compete in this well-run event, overseen by Principal Race Officer Mark Townsend.

“What makes me most proud, as Race Chair for an event of this caliber, is all the teams from around the world and the US who make a point to come up and tell us what a wonderful event this is, and how terrific the hospitality is at Alamitos Bay Yacht Club,” said Spotskey. “They truly appreciate being here, competing at and enjoying this awesome venue. That makes us feel pretty special. That’s why we do this.”

Spotskey lauded the competitors, as well as ABYC’s army of volunteers, and sponsors, including title sponsor The Moorings.

Tom White, representing The Moorings, added, “It’s an honor for The Moorings to be a part of the International Laser Class 2018 North American Championship, hosted by the beautiful Alamitos Bay Yacht Club. We could not have asked for a better platform to showcase our yacht charter vacations.” With a global field of people who love to sail, from tweens to septuagenarians, the Laser class an ideal alliance. “All of us at The Moorings look forward to working with the ILCA again in the future.”

Top five finishers in each division are: 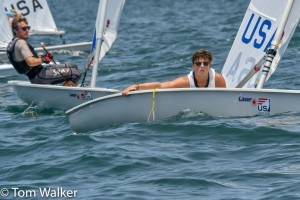 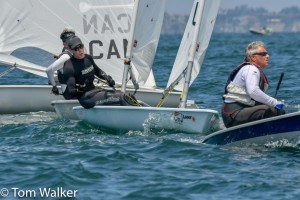 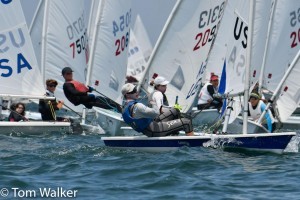