Centenary Award and the Centenary Trophy

In two and a half months' time, some of the most handsome boats from the classic yachting circuit will reunite again on the Cote d'Azur for the 8th edition of the Gstaad Yacht Club Centenary Trophy.

Can there be anything more traditional than gathering centenarian boats for a race especially conceived for them? The Gstaad Yacht Club Centenary Trophy in Saint-Tropez, has now become a true tradition.

The regatta, unique in its genre, is reserved to boats that are one hundred years or older and in 2018 will celebrate its eighth edition. Over the years, the Centenary trophy has gathered some of the most gorgeous and best performing classic yachts from the past century.

The event, raced in a pursuit format with staggered starts, is scheduled for Thursday, October 4th and is expected to be yet again the focal point of classic racing at the Voiles de Saint-Tropez. The Centenary Trophy features an especially created and constantly refined handicap system, allowing very different boats in size and rig to compete on equal terms, and its format has proved extremely attractive for the sailors and the public alike, with the first boat to cross the line off the Saint Tropez breakwater to be declared the winner.

Last year's winner has confirmed she will be back to try and be the first crew to win the Trophy for the second time in a row. The gaff sloop Tilly XV, built in 1912 for Prince Heinrich Von Preussen to compete in the North Sea races such as the Kiel Week, was renovated and started her new career in the Med, under the loving care of her long-time owner Siegfried Rittler, will be on the starting line in Saint-Tropez.

As will do two "new" centenaries debuting in the regatta this year: the German-flagged Gaudeamus from 1914 and British William Fife III designed Kismet, both gaff-cutters, the two yachts lived very different lives. "Gaudeamus has changed a lot of lifelines. She brought a family from East to West Germany, was doing social work with handicapped children and over the last 18 years, she acts as ambassador and sponsor for the charity association Africachild.de" explained her owner Raimund Marz.

Designed and built by Fife and launched when Queen Victoria was still on the throne in 1898, Kismet is celebrating her 120th anniversary. At the outbreak of WWII Kismet joined many other yachts in mud berths at West Mersea in Essex where she lay as a houseboat for over 50 years. Kismet was "rescued" from near wreck status and underwent a four-year restoration by Adrian Wombwell in Tollesbury, being re-commissioned in 2010 and last raced in Mediterranean waters in that year.

This year too, during the prize-giving night both the Centenary Trophy and the Centenary Award Silver Bowl will be on display. The prize that has been awarded last April in London to the boat deemed the Centenarian of the Year 2018 and went to Folly, a Charles Nicholson design from 1909 that is sailed in authentic period fashion on the Mediterranean classic circuit. The boat has been owned by Argentinean naval architect Germán Frers, who just recently sold it to a new owner.

She was drawn by the English designer Charles Nicholson for himself, intending to take the fight to the Scottish design William Fife in the 8-Metre class in 1909. 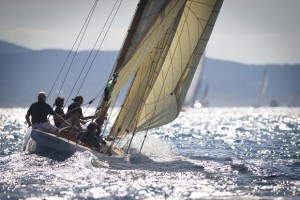 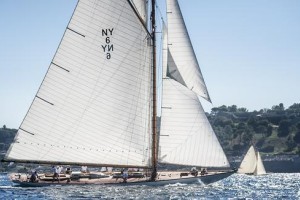 Registration has opened for the XIV gathering in Viareggio