Porto Cervo, July 8, 2018. It came down to a question of meters on the final day of racing at the One Ocean Melges 40 Grand Prix organised by the Yacht Club Costa Smeralda. The event began on July 5th and ended today with the victory of the Swedish team aboard Richard Goransson's Inga, still the team to beat in the 2018 Melges 40 season. Second place for the Italian team aboard Stig and third for the Japanese team aboard Sikon.

Goransson's team, that can count on tactician Cameron Appleton's work, won the opening Grand Prix event at PalmaVela and has added a new win to this season's results here in Porto Cervo. But the victory came right down to the line, a photo finish ending to a week hard fought against a highly competitive fleet.

Alessandro Rombelli's Italian team aboard Stig (with Francesco Bruni tactician) fought to the end to hold on to the title they won here last year. They sailed aggressively but were heavily penalised by two fifth place finishes on the first day of racing. Stig's team recovered race after race, sailing intelligently with good tactical calls, but didn't manage to recover enough points to finish first. Even though they got first place in today's second race, they finished second overall.

It was a close fight for third place too: Andrea Lacorte's Vitamina Cetilar with Gabriele Benussi tactician won the final race at this event (and their first as a newly formed Melges 40 team) but saw third place overall go to the Japanese team aboard Sikon by just one point.

Riccardo Bonadeo, YCCS Commodore, had these words: "I want to thank Melges Europe and their CEO, Federico Michetti, who is also a YCCS member. Together we have seen the first regatta dedicated to One Ocean spread its wings and fly. This new performance One Design monohull has given us days of hard fought sailing and intense emotion. We hope the Class grows and that they come back to Porto Cervo, where we will be happy to welcome them. Special thanks go to the Race Committee and to the YCCS Staff whose contribution was so important to the success of this event."

Richard Goransson, Inga's owner, had these words: "This week showed the best of what Cameron and the rest of the team can do. They all sailed really well and have become a closely knit team. I saw their team spirit shine through when we were under pressure from the rest of the fleet and from Stig especially. I'm really happy with our result and am proud of the hard work we did to get here; we fought to the end and in all wind conditions."

"Nine really tough races in a compact fleet like I've never seen before: today's win was really hard to get. Actually, it came down to the last race when we had to fight hard to hold off Stig. They were sailing just to win the race, we were trying to hold them back and in the end we managed to get first place. Like Richard said, our success is the reward for our teamwork. I think we are sailing better than we ever have" said Cameron Appleton Inga's tactician.

The next YCCS event will be the traditional YCCS Members Championship that will be held August 5th. 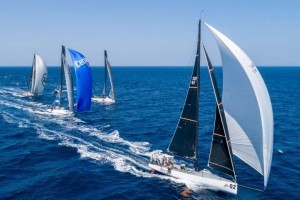