September at full steam for the Yacht Club Costa Smeralda

Porto Cervo, 29th August 2018. With the first half of the sailing season completed together with the traditional collaborations in the month of August in support of the offshore Palermo - Porto Cervo - Montecarlo race and the Trofeo Formenton in Porto Rafael, the Yacht Club Costa Smeralda is finalising preparations for an intense September, brimming with key sporting events and much more.

Activities get underway on 31 August, with an evening with the diver Davide Carrera organised by the the Consorzio Costa Smeralda in collaboration with the One Ocean Foundation. Carrera, who holds world freediving records, is an Ambassador for the One Ocean Foundation, an association promoted by the YCCS and presided over by Princess Zahra Aga Khan which aims to raise awareness on issues regarding marine environments. During the evening, Davide will talk about his relationship with the sea and marine pollution using his films and a selection of photos that will then be displayed at the YCCS Sailing School in Piazza Azzurra. The event, open to all, will be held at Porto Cervo's Waterfront Costa Smeralda at 7.30 p.m.

The month of September brings a host of regattas, including two classic events which since 1984 have seen Rolex side by side with the Yacht Club Costa Smeralda: the Maxi Yacht Rolex Cup & Rolex Maxi 72 World Championship (2-8 September) and the Rolex Swan Cup (9-16 September), a biennial event now in its 20th edition.

The Maxi Yacht Rolex Cup & Rolex Maxi 72 World Championship, organised together with the International Maxi Association (IMA), will host 43 boats, covering the entire range of racers and racer-cruisers over 18.3 metres, divided into different classes based on their technical characteristics and performance. The fleet will range from the timeless beauty of the majestic J-Class yachts used for America's Cups in the 1930s, to the most advanced state-of-the-art technology, such as the thoroughbred racers of the Maxi 72 class, or the fast yet comfortable Baltic 130' My Song, owned by YCCS member Pier Luigi Loro Piana. Present, as always, will be a fleet of ultra-modern Wally Yachts, including the latest addition to the Wallycento class, Tango, making its debut in Porto Cervo. The combination of high-level competition and exclusive social events attracts the owners of maxi yachts to this corner of the Mediterranean every year.

While the Maxi Yacht Rolex Cup is underway, YCCS will also be present at the Venice Film Festival on 4th September for a press conference to present the Film Unit of the One Ocean Foundation.

Two more days focusing on environmental sustainability, in collaboration with Arzachena town council, will take place on 9 and 10 September. On Sunday 9 September skipper Mauro Pelaschier is set to arrive as part of his circumnavigation of Italy aboard the wooden sailboat Crivizza, in his role as Ambassador for the One Ocean Foundation. The former helmsman of Azzurra in the America's Cup will arrive in nearby Cannigione to be greeted by boats from the local sailing school. An appointment is planned for that evening with sailing clubs in the area and local authorities, with the aim of disseminating the Charta Smeralda ethical code and raising awareness on protection of marine and coastal environments. The next day, 10 September, a round table will be held at YCCS with prominent local players to address environmental issues, with the focus on concrete actions and commitments.

At the same time, from 9 to 16 September, a fleet of 115 Swan yachts will gather in Porto Cervo to celebrate the 20th edition of the Rolex Swan Cup, organised by the YCCS in partnership with title sponsor Rolex and Finnish shipyard Nautor's Swan. The first edition of the event was held in 1980 and the models present will range from the Swan 36, designed by Sparkman & Stephens and launched in 1968, to the Swan 115, designed by Germán Frers. Amongst this mixed fleet will be 30 classic Sparkman & Stephens designs, including 10 Swan 65s. Much attention will focus on the fleet of Swan one-design yachts: the Swan 42s will face their European Championship, while the Swan 45s and the ClubSwan 50 will compete for their respective class World Championships.

From 19 to 22 September it will be the turn of the Perini Navi Cup, with around 20 superyachts from the renowned Viareggio shipyard taking part. The majority will compete using a staggered start formula (starts every two minutes) and the fleet will be divided into two groups: Cruiser Racer and Corinthian Spirit; this final division will sail without spinnakers. Some owners will also attend with their Perini Navi sail and motor yachts simply to be part of a unique event, packed with exclusive social happenings specially designed to entertain participants.

The YCCS season will conclude with the Audi Italian Sailing League Final from 27 to 30 September. Organised in conjunction with the Italian Sailing League (Lega Italiana Vela) and with the support of title sponsor Audi, the regatta sees those Clubs that qualified over the course of the season do battle. As always racing will take place aboard the YCCS J/70 fleet with short, fast races determining the yacht club that will be crowned Italian champion. 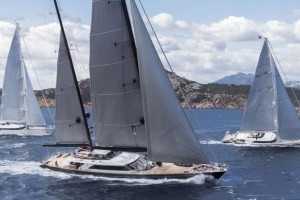 The future of onboard technologies at the 2018 Monaco Yacht Show