Countdown to the coastal races​

The fleet is back in port after the Sanremo- Saint Tropez race, with victory in the first leg of the RG going to the crew of Hebe V in ORC and of Rossko in IRC. In the Gulf of Saint Tropez a magnificent day of stiff breezes welcomed the crews who took advantage to fine tune their yachts for the coastal races.

Saturday was interpreted in different ways by the crews who started filling the Gulf of Saint Tropez. With the 80 yachts entered for the Sanremo-Saint Tropez who began arriving over the morning – 7h45m

was the uncorrected time for Vera, the Maxi yacht that was first across the finish line in Saint Tropez, and it was a “foreign” double in the ORC and IRC divisions with the Victoria in compensated time of Hvelka Jakub’s M37 Hebe V (11h00m45s) in ORC and Zhbankov Timofey’s very fast JPK 10.80 Rossko (10h30m39s) in IRC.

An afternoon’s rest for these crews who had been battling all night in a long and soaking wet beat up to Sanremo, with seas running and a south-westerly wind. But it was a day of intense training in the Gulf for the rest of the fleet, which took advantage of a good stiff breeze for a final tweaking of yachts and crew.

So the games start tomorrow, with the gun at 11 o’clock to start three days of coastal racing and the spectacle of 241 boats that from tomorrow will be filling the Gulf of Saint Tropez with colour.

The Rolex Giraglia demonstrates once again it’s a real spectacle, increasingly appreciated by yachtsmen and enthusiasts: an increasing number of foreigners and very high level crews for this regatta which, since 1953, has continued to innovate while remaining faithful to its nature. 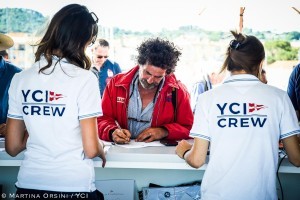