Exactly fifteen years after it was established - fifteen years in which it successfully became a leader in a very competitive sector such as yacht design - Hot Lab continues to thrive and has some news to announce.

The Milan-based firm has become a “srl” [Italian limited liability company] and is now led by two of the three original founders, Antonio Romano (marketing and strategy director) and Enrico Lumini, design manager. “After fifteen years, we bid farewell to Michele Dragoni, wishing him all the best in his future professional challenges,” said Antonio Romano, who then described some of the reasons behind Hot Lab’s current levels of excellence. “One of our strengths is that we follow every aspect of our work internally, from concept to technical design, from the general plan to the renderings and finally to execution. All our team have been working together for more than five years, creating a team spirit that is positively reflected in the projects we execute and that is behind our versatility and ability to customise every project, binding it to the customer’s style.” Some of the most important shipyards that the team led by Antonio Romano and Enrico Lumini have worked with are Arcadia, Baglietto, Bilgin, Columbus, Fincantieri, Heesen, Hylas, Icon, Mondomarine, Moonen, Nobiskrug, Oceanco, Otam, Perini Navi, RMK, Sarp, Turquoise, Van Der Valk and VSY.

In the past fifteen years there have been considerable changes in the world of design. Being able to keep up with the trends (and even be ahead of them) has been one of Hot Lab’s secrets, according to Enrico Lumini. “Design has always been an evolution of style, an improvement or an incremental change of what is considered ‘attractive’. For us, what can now be considered a good design is to approach the project in the clearest, truest and most genuine manner. There is no interference from trends, we use our abilities to transfer a specific mood to a room. I would consider it an ‘architectural’ approach more than a ‘detailed’ approach. The more guests are moved by what they find aboard, the better the result we have achieved. Simply stated, the current evolution of design means giving a soul to our projects.”

The four yachts that Hot Lab worked on and that have been or will be launched in 2019 are already confirmation of the versatility of the Milan-based firm. They include two Arcadia Yachts models, the new Arcadia A105 Sea Coral II and the first Sherpa XL, which will have its world début at the upcoming Cannes Yachting Festival. The new 43m, full-custom M/Y Sunrise, made by the Turkish shipyard Yildiz with interiors designed by Hot Lab, will be launched in July 2019. The interior design of the new H60 sailing yacht by Hylas Yachts is the work of the Italian firm, which had the space provided in the hull by German Frers as starting point. Another 41m full-custom yacht by the Yildiz shipyard and the new 54m Baglietto (with exteriors by Horacio Bozzo) will be ready next year.

During the MYS 2019 the firm will present three new exterior and interior design projects on yachts ranging between 55m and 70m in size for several famous international shipyards.

Over the years, Hot Lab has earned many international awards, including a number of ShowBoats Design and World Superyacht Awards, in addition to World Yachts Trophies and the Finest Interior Awards. 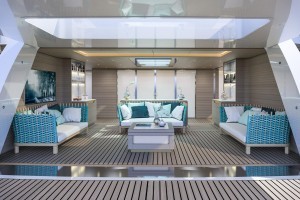 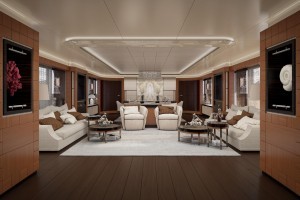 Maserati Multi 70 and Soldini are ready for the Transpac

MY Sunrise with Hot Lab interior design delivered to her owner