The Danish Børge Børresen, legend of the Dragon both on the regatta fields and as builder of these boats, used to remember that "the problem with the regatta among One-Design boats is that the best one usually wins". The Dragon does not escape this logic, the most widespread one-design keel boat in the world. 8.90 meter long, 1.95 meter wide, this sloop Marconi was conceived in 1929 by the prolific Norwegian yacht designer Johan Anker (1871-1940), already author of international metric class boats. At the time Anker conceived a small boat with low costs, able to win the regatta organized by the Royal Gothenburg Yacht Club. Thanks to the small cabin and two rudimentary berths she could also take short cruises in the fjords. In 1948 the Dragon became an Olympic Class.  Since 1972, when she was excluded from the Games, she has increased her popularity, thanks to the IDA (International Dragon Association, www.intdragon.net), which well managed her measurement control and limited the introduction of news. Today the Dragon is represented in 31 nations of 5 continents. In Italy and in the Mediterranean the reference yard for professionalism, restoration and maintenance has become the Sibma Navale of Mario and Andrea Quaranta (www.sibma.it), father and son, also active racers on board their dragon "Little Diva", Italian champion in charge. It is estimated that in 2019 there are 1360 dragons registered for racing, excluding an equal number of dragons used only for pleasure.

THE NUMBERS OF THE DRAGON

Technique, physicality, attention to detail, meticulousness. It is what is necessary to conduct a Dragon. First of all one need to be good sailor, able to manage at the same time a dozen maneuvers and adjustments, continuously modifiable according to the changed wind and wave conditions. The crew can be composed of 3 or 4 people. The important thing is, as per regulation, that the total weight of 285 kilograms is not exceeded. Usually she does not race with a wind less than 3 m/s, about 6 knots, but there is no maximum limit. For example, in 2018, during the Italian Open Championship in Sanremo, the fleet  raced with over 35 knots of wind, often gliding on the waves at 16 knots of speed. Even with all the mainsail hoisted and spinnaker, the Dragon proved to be superlative and sure. The Dragons built after 2009 cannot sink, thanks to a floating reserve of 2100 liters that guarantees the buoyancy. The boat is easily towable and its width, less than 2 meters, is within the maximum admitted limit of 2.50 meters (the boat weight is 1,700 kilograms).

The owner of the Dragon is usually a manager or a professional aged between 40 and 60, often a former champion from international competitions and victories achieved on board international class such as the Star, the Soling, the Finn or the Flying Dutchman. These include the 62-year-old English Lawrie Smith, who won in 1992 an Olympic gold medal in the Soling class, who was already skipper in three around the world races. Few women are racing in Dragon, mostly of German, English or Dutch nationality. The European dragonists come mainly from nations such as France, Germany, Portugal, Spain, Italy and from Nordic countries like Sweden and Norway. Around 80 boats participate in the world championship, which takes place over the odd years. In the even ones the European championship is held, with a maximum number of 60 boats. At the Gold Cup, held annually only in selected European countries, 100 Dragons are also registered and 6 races are run (without any discharge of results). A fleet of over 60 boats regularly takes part every September at the Régates Royales in Cannes, on the French Riviera.

To date, the world's leading Dragon manufacturers are: the Danish Borresen (www.borresen.com), which has launched more than 1500 in over 60 years, the English Petticrows (www.petticrows.co.uk), 700 Dragons built, and the German Glas (www.bootswerft-glas.de) which celebrates 40 years in 2019 since it began producing these boats. The Ukrainian shipyard Lagoon Royal (www.lagoonroyal.com), author of new classic sailing and motor wooden boats, has been added for just over a decade. Their Dragon, made entirely of wood and already sold in several examples, has successfully passed the checks carried out at the time by Gunter Ahlers, measurer of the International Dragons Association. Today the Dragon continues to be built at the rate of 40-50 units a year.

The Italian Dragon Association (www.assodragone.it) was founded in 1989 by the Bolognese Piero Guidi, who died in 2008. His daughter Susanna then followed in his father's footsteps racing aboard Buriana of 1963. To manage the association for over twenty years ago Antonio 'Tonino' Viretti, president and factotum still in charge. Genovese, born in 1936, former manager of the pharmaceutical sector and sailor for more than half a century, has raced on his Dragon Fanfouette since 2004. The first Italian Dragons were Ausonia (ITA-1), built by Beltrami shipyard in 1948 donated in the mid-nineties to the president of the Royal Yacht Club Canottieri Savoia of Naples, and Blue Mallard (ITA-2), built in 1949 by the Norwegian shipyard Brødrene Rolands on which former Admiral of the Italian Navy Cristiano Bettini has raced in the past. Among the other Dragons seen on the regatta fields Fafnir III, Japetus, Alì Babà II of 1964, Tramontana, Cloud of the Venetian champion Giuseppe Duca, Celina III, Acanto of 1966 and Nathaly of 1961. Galatea II, launched in 1951 by the shipyard Baglietto, she participated in the Finnish Helsinki Olympics in 1952, where she was placed ninth on seventeen participants. Today she races thanks to the Milanese brothers La Scala and on the hull the five Olympic circles are clearly visible. In 1936 Taifun, built in Sweden, and Stella III the record of being the oldest wooden sailing Dragon in the Mediterranean, as well as among the oldest in the world. In recent times Taifun made a base at the Yacht Club Italiano in Genoa.

There are always a dozen Dragons subjected to ordinary or extraordinary maintenance work inside the Sibma Navale shipyard in Dolcedo, in the Ligurian hinterland behind Imperia. The yard has become a reference point for European dragonists. On request the customers' Dragons are transferred on the various race fields, by making them "ready to race". Than, after the races, the boats are brought back to the yard. Among those undergoing restoration Venture, built in 1960 in mahogany plating on the skeleton in ash by the Danish yard Pedersen & Thuesen (operating between 1949 and 1983). The boat entered the Sibma in November 2018, achieved many successes in England in the sixties, then it ended up in Holland. The current Italian owner will return to sail from the spring of 2020, after a complete "top race condition" restoration. Raubritter is another 1964 Pedersen & Thuesen, also built in mahogany and ash, which is now owned by a Russian. Entered in October 2018 will be released in May 2019. To these are added Zenith, a Borresen of 2002 in fiberglass with wooden roof and deck, Michina, a Dragon with cabin and berths launched in the late fifties by the Hannibal shipyard in Monfalcone. In storage Blue Haze, a Pedersen & Thuesen of 1959, the historical Venilia, a 1957 Borresen winner of the bronze medal at the 1960 Olympics in Naples, owned by Mario Quaranta, Javelin, a Pedersen of 1962, Josephine, a Pedersen of 1959 already winner of a Gold Cup and Jeanie, a Petticrows of 2018. It is estimated that in Italy there were 70 sail numbers released by the Dragon class. 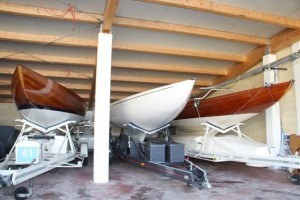 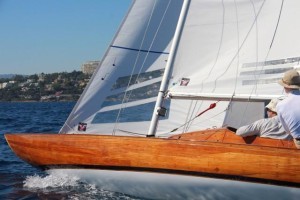 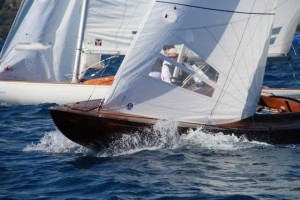 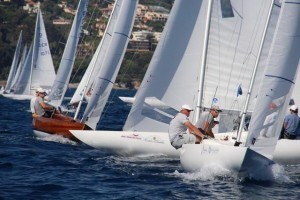